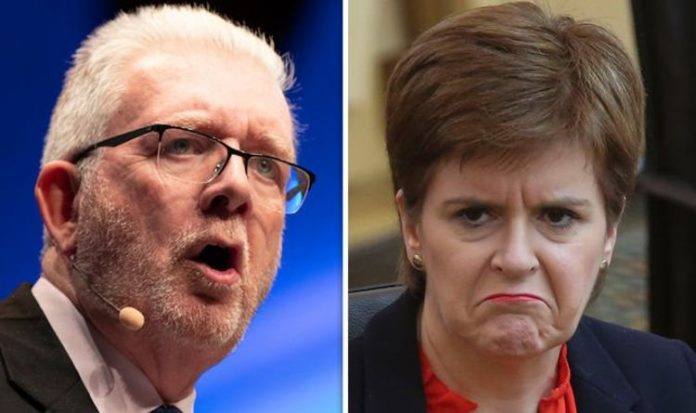 On January 1, the post-Brexit transition period expired, meaning EU rules no longer apply in Britain. It is a new chapter for the country’s national history – but not everyone in the UK has given up on EU membership. Despite Prime Minister Boris Johnson repeatedly rejecting her independence calls, Scottish First Minister Nicola Sturgeon is determined to hold a second referendum in the spring of 2021.

She wrote: “We are now faced with a hard Brexit against our will, at the worst possible time in the middle of a pandemic and economic recession. It will mean disruption in the short term, while establishing new long-term barriers. Our people will be less safe and their right to work, study and live elsewhere in Europe will be restricted. This includes the loss of Erasmus, which saw more than 2,000 Scottish students, staff and learners use the scheme each year.

“It is therefore not surprising that a consistent majority of people in Scotland now say they are in favour of becoming an independent country.

“Scotland, like all nations, is unique. The same can be said of our constitutional circumstances.”

Ms Sturgeon has not ruled out making a request to the Government to allow Scottish students to continue to take part in the Europe-wide Erasmus exchange programme.

Her request, though, appears to be at odds with what the newly elected President of the SNP, Michael Russell, said in 2011.

Nine years ago, Mr Russell, who was serving as Education Secretary, complained about subsidising EU students – suggesting he thought Scotland must be for Scots.

He told the Scottish Parliament that, if re-elected, the SNP government would have charged students from other EU countries to study in Scotland.

He said ministers were exploring an annual service charge for EU students similar to the one in Ireland.

JUST IN: UK braces for Joe Biden to dismiss trade talks after spat with PM

Mr Russell said: “I have long had concerns about the subsidy we pay for EU students.

“The numbers have almost doubled over the last decade – the cost to the Scottish taxpayer stands at £75million.

“So I also intend to explore further, within the boundaries of European law, the possibility of reducing this.”

Despite the promise, EU students have never been charged for studying at Scottish universities.

Mr Russell is not the only SNP politician who has been wary of the bloc in the past.

In 2016, Jim Sillars, the party’s former deputy leader, announced he would campaign in favour of British withdrawal from the EU.

He said during the referendum campaign: “I think the EU is a profoundly undemocratic organisation which has shown a callous disregard for people, in Portugal, Spain and Greece for example.

“They’ve been willing to make people destitute – beggar nations – in pursuit of a single policy to create a United States of Europe irrespective of whether the people want it.”