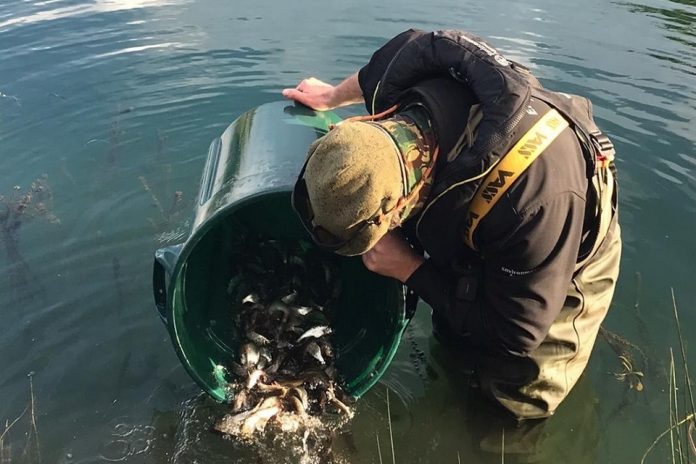 Every year, the Agency’s Calverton Fish Farm near Nottingham breeds coarse fish for release into rivers and still waters across England to help boost fish populations.

Officers from the Agency’s Bridgwater fisheries team spent a busy day on Thursday 17 December putting 2,900 fish into the River Sheppey and 1,450 into Marston Pond. The team also visited West Sedgemoor main drain to release another 1,259 fish.

The Rivers Frome and Sheppey lost a large number of fish following pollution incidents in 2016 and 2018 and will particularly benefit from the re-stocking that will help fish numbers recover.

Somerset boasts many angling clubs which is evidence that there is a healthy amount of fish in the county’s waterway. But occasionally a helping hand is needed to restore the natural balance in the wake of an incident or decline.

The work of our National Fish Farm is funded by income from licence fees, so in the lead up to Christmas it’s great to see the fish farm continuing to produce strong and healthy fish needed for re-stocking and recovery.

The restocking is part of an annual programme funded by income from rod licence sales. Restocking occurs in winter because water temperatures are low and this minimises any stress on the fish, giving them the best possible survival rates.

Restocking is done where numbers are low, have been depleted following a pollution incident or to create new fisheries and opportunities for anglers.

You need a rod fishing licence to fish for salmon, trout, freshwater fish, smelt or eel with a rod and line in England. Get yours from https://www.gov.uk/fishing-licences.