This could have been the reason the Queen invited the Wessexes to Balmoral ahead of any other royal relatives.

While Lady Louise’s results have been kept private, Sophie Wessex has previously revealed she is proud of her “clever” daughter.

The Queen’s granddaughter’s grades were based on her teachers’estimates after the Government came under fire for A-Level grades being decided by an algorithm which led to poorer students receiving worse results.

The Countess said: “She’s working hard and will do A-levels.”I hope she goes to university. I wouldn’t force her, but if she wants to. She’s quite clever.”Prince Edward and Sophie chose not to raise their children with HRH styles in order to give them a down-to-earth upbringing. 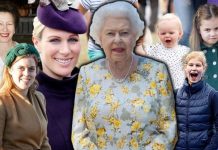