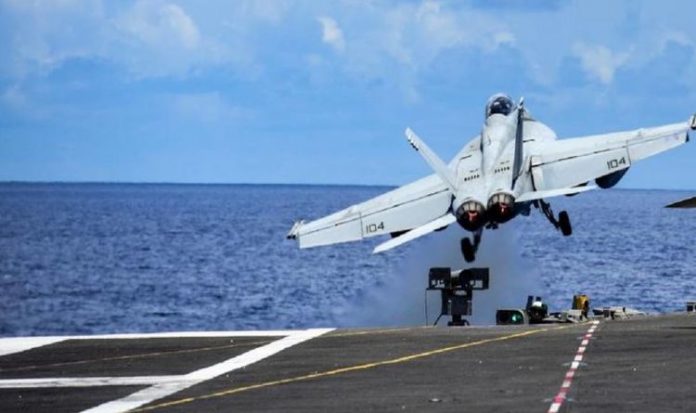 The strike group was led by the USS Ronald Reagan and training included air-to-air operations, combat search and rescue drills and air defence exercises, the US Navy said in a statement. The US regularly sends warships through the waterway. In a statement, it said this is done to “build and maintain war fighting readiness that is responsible, flexible, and honours enduring commitments to mutual defence agreements with regional allies and partners”.

The navy said the operations showed their commitment to “freedom of the seas”.

“The recent integrated training between our Carrier Strike Group and Air Force B-1s is the latest example of how we are continually working to stay synched with all of our joint partners and ready to respond to any contingencies throughout the region.”

The drill comes amid rising tensions between China and the United States.

The Trump administration has repeatedly criticised Beijing over its handling of the coronavirus crisis and accused it taking advantage of the pandemic to push territorial claims in the South China Sea and elsewhere.

China has objected to such exercises and said US rejection of its claims in the region has heightened tensions and undermined stability.

China claims nine-tenths of the area, through which some $4trillion (£3.06trillion) of trade passes each year.

Brunei, Malaysia, the Philippines, Taiwan and Vietnam have competing claims.

Relations have soured between the two powers due to the controversial Hong Kong security law, the build-up of arms in the South China Sea and sanctions on Communist party members over the treatment of Uighur Muslims.

President Donald Trump has also clashed with China over apps TikTok and WeChat, which could be banned in the US amid national security concerns.

China has hit back at America over recent threats, with one foreign ministry official claiming Bejing will “not back down” in the sea.

The US and China are due to resume trade talks in the coming days, which last took place in January before tensions escalated, exacerbated by the health crisis.

Relations between the two states have reached crisis levels causing China’s vice-foreign minister, Le Yucheng to intervene and warn the state will not give an inch to the US.

Le said on Wednesday: “On issues concerning China’s core interests and national dignity, there is simply no room for us to back down.

“If we give up an inch, they will ask us to back off a mile and through salami tactics, they will never stop undermining China’s sovereignty and dignity.”