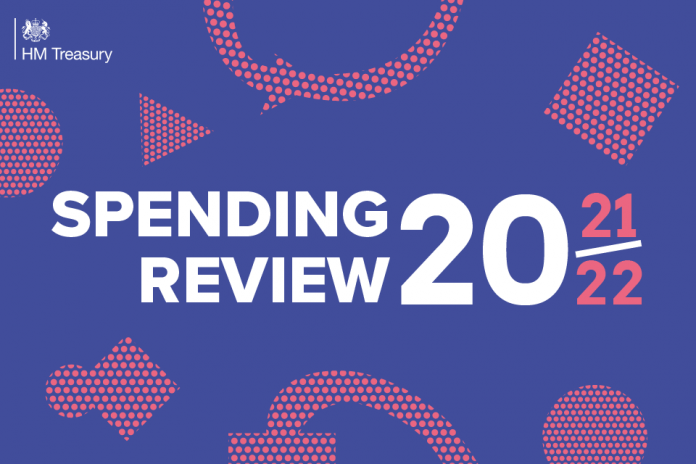 Delivering the Spending Review, Rishi Sunak said his immediate priority was to protect people’s lives and livelihoods as the country continues to battle the outbreak – allocating £55 billion to tackle the virus next year.

He also set out how the government would deliver stronger public services – honouring the promises it made to the British people with core day-to-day departmental spending growing by £14.8 billion in cash terms next year compared to 2020/21. From 2019/20 levels, that is an average growth of 3.8% a year, the fastest rate in 15 years.

The Chancellor also announced how the government would deliver the next stages of its record investment plans in infrastructure to drive the UK’s recovery and level up for a greener, stronger future with £100 billion of capital spending next year and a £4 billion Levelling Up Fund.

Setting out the budgets for government departments and devolved administrations’ block grants for 2021/21, the Chancellor of the Exchequer Rishi Sunak said:

Today’s Spending Review delivers on the priorities of the British people. Our health emergency is not yet over, and the economic emergency has only just begun; so our immediate priority is to protect people’s lives and livelihoods.

The Spending Review builds on the unprecedented action already provided to tackle the pandemic so far. It confirms an additional £38 billion for public services to continue to fight the pandemic this year, and a further £55 billion to departments to respond to Covid-19 next year, including £2.6 billion for the devolved administrations.

Targeted funding is also being provided to support vital public services to help them meet and recover from the challenges of Covid. This includes money to help the NHS recover and address delayed treatments, extra funding for local authorities, support for transport, and funding to help the justice system address backlogs.

Delivering real-world improvements to the day-to-day services provided by public services is at the heart of the government’s vision to rebuild for a stronger future. The Spending Review delivers on the government’s promises to support a high quality, resilient healthcare system, level up education standards, continue tackling crime to keep people safe, and support local authorities in their efforts to serve local communities. This includes:

Throughout the pandemic the government have provided an unprecedented economic support package to protect and create jobs. The Spending Review builds on this by investing an additional £3.6 billion to build on commitments made in the Plan for Jobs.

The Spending review announces the next phase of the government’s infrastructure revolution with £100 billion of capital expenditure next year, to kickstart growth and support hundreds of thousands of jobs. It gives multi-year funding certainty for select projects – such as school and hospital rebuilding, housing and transport schemes – and targets additional investment in areas which will improve the UK’s competitiveness in the long-term, backing new investments in cutting-edge research and clean energy sources, investing in a greener future by delivering against the Prime Minister’s ten-point plan for climate change.

The Chancellor also set out plans to further the levelling up agenda by launching a new £4 billion Levelling Up Fund that will invest in local infrastructure that has a visible impact on people and their communities and will support economic recovery. A refreshed Green Book will also better link projects and programmes to Government objectives, including on levelling up and Net Zero.

This is supported by the new National Infrastructure Strategy outlining the government’s long-term vision for infrastructure investment, and a new UK infrastructure bank – headquartered in the north of England – to work with the private sector to finance major new investment projects across the UK. And to ensure that Government policies that have the most impact on levelling-up are created by those living in communities outside of London and the South East, the Treasury will set up its Northern headquarters next year. This is part of a wider work that will see thousands of civil servants move to the regions and nations of the UK.

To help people with their finances, the Chancellor also announced an increase in the National Living Wage, by 2.2% to £8.91 an hour from April 2021, likely benefiting around two million of the lowest paid. Alongside that, 2.1 million public sector workers who earn below the median wage of £24,000 will be guaranteed a pay rise of at least £250. And to help businesses, the business rates multiplier will be frozen in 2021-22, saving businesses in England £575 million over the next five years.

The Spending Review also strengthens the UK’s place in the world as open and outward-looking, leading in solving the world’s toughest problems. The UK will spend the equivalent of 0.5% of national income as overseas aid in 2021. The Spending Review therefore provides £10 billion of Official Development Assistance (ODA) in 2021-22. This will ensure the UK remains one of the largest overseas aid donors in the world.
And to provide security not just for the UK but also around the world, the Chancellor also confirmed the announcement made by the Prime Minister which will see over £24 billion of investment in defence, the biggest sustained increase in 30 years.

Further information on projects funded by capital spending next year: