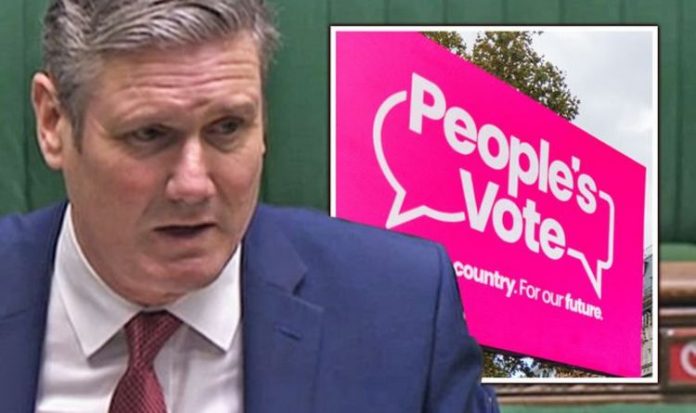 Brexit: Soubry says people’s promises ‘have not been delivered’

The Labour leader has signalled he is planning to order Labour MPs to back a Brexit deal if one is reached before December 31. While he would look at the details of an agreement before deciding whether to pledge his party’s support, Sir Keir said: “If the choice is a deal or no deal, then a deal is obviously in the national interest. Yet, reports suggest that members of the party claim the leader is already set on backing any deal.

It is a point that has further fissured Labour after infighting burst out over the suspension of former leader Jeremy Corbyn in October.

Most of the shadow cabinet are made up of Remainers, with many having previously championed a second referendum, including Sir Keir who was considered one of the leading architects of the People’s Vote cause.

It has been argued that Brexit is one of the biggest factors that led to Labour’s downfall in the 2019 election.

Sir Keir’s move, then, has been interpreted by many, including Paul Embery, a trade unionist and “Blue Labour” member, as a way to prove to the country’s working classes that the party is serious about listening to them.

This could be scuppered, however, as Labour members are keen to abstain from backing a vote, with up to 60 backbench MPs threatening to rebel against their leader.

According to The Guardian, Sir Keir might be swayed, after a shadow cabinet minister told the publication there was a “feeling” the leader’s mind could be changed.

Any move that suggests Sir Keir and the Labour Party align closer to the EU than the UK would, Mr Embery said, be the nail in the coffin for the party.

He explained: “I think any attempt by the Labour Party to rejoin the EU I think will be absolutely disastrous, I think it’d be fatal.

JUST IN: Queen’s complaint about EU getting ‘too big’ in Turkey membership hint

Jeremy Corbyn: Many are dissatisfied with Starmer’s leadership (Image: GETTY)

“For the foreseeable future, a good number of years, the Labour Party has got to accept that we’re out of the EU and there’s no going back in.

“And so everyone in the party has got to get that message.

“There are people in the party who are fanatically pro-EU, and it will go against everything that they believe in to accept that we’re out and we’re staying out, but they’ve got to.

“If they’re serious about reengaging those lost Red Wall voters they’ve got to.

Corbyn suspension: The former leader was suspended from the party but later readmitted (Image: GETTY)

“And there’s no room for self-indulgence on this.

Prime Minister Boris Johnson is travelling to Brussels in order to break a deadlock in negotiations.

He will meet with European Commission President Ursula von der Leyen, in the hope that talks between officials will resume this week.

Meanwhile, Labour MPs have been divided following a private polling briefing from BritainThinks.

The research institute suggested that Red Wall seats would not forgive MPs if they failed to back a Brexit deal.

And while some are reportedly convinced – like Mr Embery – that the only way back to power is through those Midlands and north of England communities, others argue the polling could not capture the nuances of the question.

They say that should the party back a deal, Labour’s integrity may face irreparable damage in the future.

Yet, as Mr Embery put it: “Reclaiming those Red Wall seats has got to be the guiding mission for the Labour Party.

“It’s got to win back those working class communities who were once it’s backbone that they’ve abandoned.”