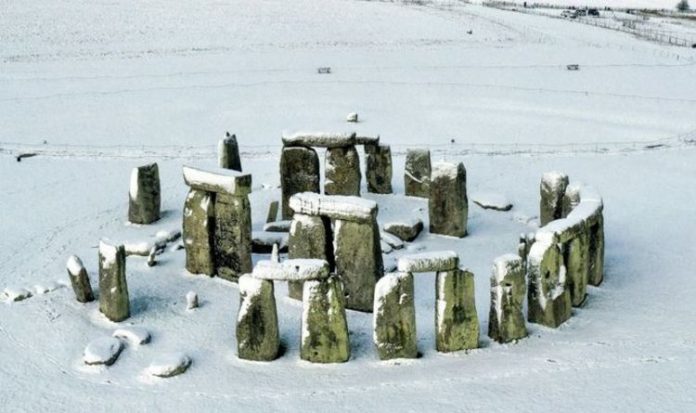 One of Britain’s biggest and oldest stone circles has been found in Wales – and could be the original building blocks of Stonehenge. Archaeologists uncovered the remains of the Waun Mawn site in Pembrokeshire’s Preseli Hills. They believe the stones could have been dismantled and rebuilt 150 miles away on Salisbury Plain, Wiltshire. Last week Stonehenge provided yet more relics for excavators to pour over as two prehistoric bodies were dug up near what will soon become a tunnel for the A303. A separate piece of Bronze Age industrial land was also discovered, believed to belong to the ancient “Beaker” culture people who arrived in Britain around 2,500 BC. Historians claim the Beakers travelled from the Eurasian Steppe in the Far East.

They would have been just one in a cultural melting pot of peoples to have at one point in history visited the site.

Other artefacts have been dug up in and around Stonehenge, like Roman pottery, metal coins and Mesolithic post holes.

The first stage of the man-made formation is thought to have been built around 5,000 years ago.

Experts say the structure then went up in several stages over the years.

Stonehenge: The ancient site has offered up myriad relics over the years (Image: GETTY)

A303 tunnel: Protestors have frequented the site in a bid to thwart the planned motorway tunnel (Image: GETTY)

The earliest parts of the immediate area are four or five pits, three of which, according to English Heritage, appear to have held “large pine totem-pole like posts erected between 8500 and 7000 BC”.

While the ditches have been linked to Stonehenge, it is unclear in what way they relate to the structure.

The question of who and why still remains, with the National Geographic’s Naked Science documentary, ‘Who Built Stonehenge?’ having previously set out to answer the age-old mystery.

Listing some of the ancient and potentially key finds around the site, it revealed a vast range of contrasting relics that, when combined with modern carbon dating technology, might help provide answers to its social origins.

JUST IN: Stonehenge discovery ‘like nothing seen before’ fueled new theory

Noting how “nothing quite like it has been built before, or since”, the documentary said: “Stonehenge does not give up its secrets easily, but there are clues to be found if you know where to look – deep under the stones.

“Early archaeologists found antler horns, pottery, and even human remains in the area.

“Superseding less reliable tests of the past, scientists can now test artefacts like the antler horn previously found to tell exactly how old it is.

Salisbury: Engineers and archaeologists work on the site which is near Salisbury (Image: Youtube/NakedScience)

Ancient relics: The antlers that were found at the site which helped establish a date (Image: Youtube/NakedScience)

“Because it was buried exactly beneath the stones, it tells the most likely date when Stonehenge was built.”

Some of the most conclusive tests were published in 1995, when scientists realised some previous estimates had been way off the mark.

The final stage of Stonehenge soon proved older than what was previously thought, built as far back as 4,000 years ago.

Historic England: Some of the most groundbreaking finds around England (Image: Express Newspapers)

This made for an estimated 1,000 years between the first and last stages of the formation’s structure, leaving a significant gap for activity to have taken place.

It is believed that during the first stage, when the majority of southern England was covered in dense woodland, the chalk download of Stonehenge may have been an unusually open landscape for the people who stumbled upon it.

This, so say historians, might provide at least a foundational reason as to why it became the site of an early Neolithic monument.

Motorway: Police have been deployed to the site in recent months to stop protestors gathering (Image: GETTY)

The earliest known major event at Stonehenge was the construction of a circular ditch with an inner and outer bank, built in around 3000 BC.

It enclosed an area about 100 metres in diameter and had two entrances, the early form of henge monument and the beginnings of what has become one of the world’s greatest mysteries.

Professor Alice Roberts, the anthropologist, will this evening join researchers in the documentary, ‘Stonehenge: The Lost Circle Revealed’, who used 3D scanning techniques and traditional arcaheology, combined with novel laboratory analysis, to put together the final parts of the Stonehenge puzzle.