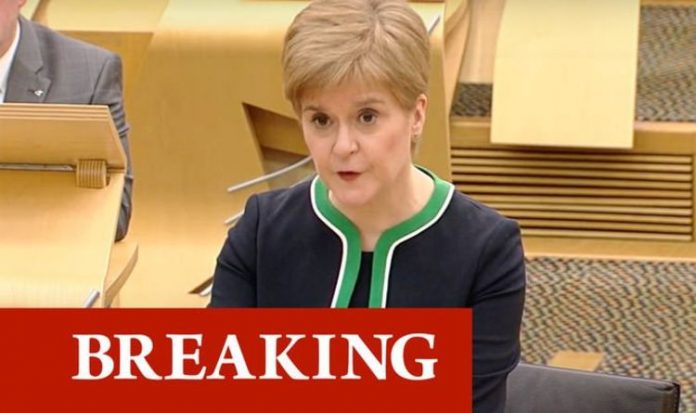 Announcing the change, First Minister Nicola Sturgeon said: “In all of these areas, there are grounds for continued and significant concern.”

She said the Level 4 restrictions meaning all places but essential retail will close and will be in place for three weeks and will be lifted on December 11.

The First Minister said the total number of deaths from Covid-19 in Scotland will pass 5,000 in Scotland this week.

Updating MSPs on the protection levels in local authorities on Tuesday, the First Minister said that National Records of Scotland will release a weekly report on deaths on Wednesday, which could confirm the milestone.

The First Minister said: “That is a sombre and distressing milestone. It is important we acknowledge it and remember every individual whose life has been lost to this virus.

“Those figures remind us of the harm and heartbreak that this virus causes if allowed to spread. “

Under tier four restrictions, people will not be able to meet with another household in their homes however people can meet one other household indoors in a public place with a maximum of six people from two households.

Groups of six from two households can meet outdoors in a private garden or public place such as a park.

Restaurants, cafes, pubs and bars will be closed under level 4 restrictions though takeaway can continue to operate whilst Gyms will close.

Within the measures, close contact services which include hairdressers and beauty salons must close along with all indoor visitor attractions such as museums, galleries, heritage attractions, indoor areas of zoos and aquariums are closed.

The First Minister stressed that placing council areas in Scotland into the toughest restrictions is intended to be “short and sharp”.

Ms Sturgeon said the changes were intended to have an impact ahead of Christmas and told MSPs: “I know people are frustrated that other restrictions have remained in place longer than planned.

“But Level 4 is intended to be short and sharp. And in this situation, it is specifically intended to have an impact in advance of Christmas and the most challenging winter period.

“Lifting the Level 4 restrictions then – as we will do – also means that they will not be in place for most of the Hanukkah period – so again, while celebrations may be different, there will be a greater degree of freedom.

“We will assess nearer the time the level that will apply in each area when the Level 4 restrictions end on December 11.”

The First Minister added that she hoped the affected areas would be able to move to Level 2 “much more quickly than would otherwise be the case”.

READ  Theresa May Brexit deal: Why has the EU rejected the Chequers plan? | Politics | News - UK