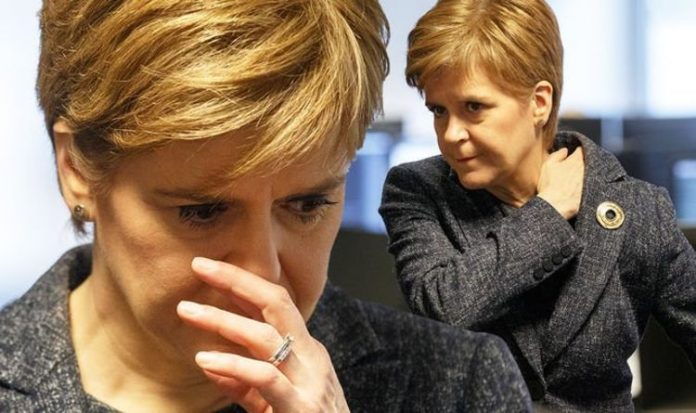 Nicola Sturgeon’s Scottish National Party have been accused of “destroying the future” of Scottish children after the Scottish Qualifications Authority’s (SQA) introduced a moderation process, which saw the pass rate of pupils in the most deprived data zones reduced by 15.2 percent from teacher estimates. In contrast, the pass rate for pupils from the most affluent backgrounds dropped by 6.9 percent.

But Ms Sturgeon defended the system, saying it helped to maintain the “credibility” of results.

However critics, and even SNP supporters, hit back accusing the Nationalist party of causing “huge distress “ and ruining the “future of kids with the ‘wrong’ postcode”.

They called for Ms Sturgeon to resign, saying the children of Scotland “deserved better”.

Pauline Fulton said: “Can’t believe as a lifelong SNP voter I am about to do this, but on behalf of the disheartened over-achievers from Scotland’s 285th ranked school, who dared to believe hard work would pay off, I say #resignsturgeon”

David Martin said: “#ResignSturgeon I’m a huge supporter of the SNP.. but this. This is awful. Do the right thing @NicolaSturgeon call it a day. Before you drag the party down with you.”

Andrew Christie posted: “I walked away some time ago. They are destroying Scotland and our children’s futures.

“Divided Scotland with hatred I have never seen in all my many years. Truly incredible and very sad to see.”

Another tweeted: “From what I’ve seen it was poorer areas that were targeted and now there is no explanation or appeal. Astonishing really.

READ MORE: Not so fast Nicola! Sturgeon told EU might not even let Scotland join

“I used to like Sturgeon but I doubt even Thatcher would have tried this.”

George Foulkes said: “The Scottish exam fiasco seems to be the last straw of SNP Government incompetence with even SNP activists up in arms as poorer students marked down. @NicolaSturgeon asked to be judged on education performance #ResignSturgeon.”

Milly added: “No idea why they’ve done this – feels like clumsy (and very public) statistics management, which you’d think they’d have anticipated.

Anarj Jim posted: “Explain that to my nephew who got 4 A’s for prelims, he has always got A’s right through his schooling far as I can remember.

“His results yesterday, 1A and 2B’s and a C, a C! His school isn’t the best but he works hard. Deserves better. #ResignSturgeon”

One tweeted: “The whole point about Scottish education was that you could be born in a council house on a sink estate and still get to university and make a better life for yourself if you worked hard.

Ben said: “Surely even the most ardent SNP Supporter cannot defend or support the horrendous exam shame which has purposely selected & penalised those from less well off areas.

“It has caused huge distress and ruined the future of kids with the “wrong” postcode. #ResignSturgeon #examresults”

“Futures ruined. All because kids grow up in a council estate / social deprivation. No wonder #ResignSturgeon is trending. This political issue will not go away.”

But the First Minister argued that without the moderation, a 19.8 percent increase of the pass rate among the poorest fifth of pupils would have been “unprecedented and therefore not credible”.

At National 5 level, the pass rate for the poorest pupils was 74 percent when teachers’ estimates would have led to an 84.5 percent pass rate without moderation.

For the least deprived, the 92.3 percent estimated pass rate fell to 87.1 percent after the SQA’s moderation.

In Scotland’s first school year without exams due to coronavirus, more than a quarter (26.2 percent) of grades were changed during moderation by the SQA – a total of 133,762 – while 377,308 entries were accepted unchanged.

The exam board’s criteria for moderation included the historic performance of schools and grades were adjusted “where a centre’s estimates were outside the constraint range for that course”, according to the SQA chief examining officer Fiona Robertson

Education Secretary John Swinney said despite the downgrading 124,564 pupils’ results – 93.1 percent of all the moderated grades – exam pass rates rose at every level and would have been the highest on record without the SQA downgrading some submitted results.

Asked about the SQA’s figures showing deprived children being affected more by the downgrading of results, Ms Sturgeon said: “What we want to make sure is that this year’s results have the degree of credibility that means that they are not so out of sync with previous years that people are going to look at them and say ‘they don’t make any sense’.

“As much as I would love to be in the position of standing here credibly saying that 85 percent of the 20 percent in the most deprived areas had passed Higher, given that it was 65 percent last year, that would raise a real credibility issue.

“Anybody who has a result has passed a Higher or a National 5 today, can hold their head up for having a credible exam result, albeit without the actual exam.

“That’s why the methodology in the moderation system is important in order to do that so that people don’t look at incredible inflation and pass rates and say the whole system wasn’t in some way credible.”

Mr Swinney stressed that approximately 90 percent of moderation “involved a change of just one grade”.

He added: “We’ve maintained the overwhelming majority of estimates that have been put forward by teachers and the changes that have been made are essentially those fine-grained judgments that are required to be made on an annual basis.”

He pointed out that the performance gap between the least and most deprived young people has narrowed compared with 2019.

He added: ”That demonstrates that, inherently, this system has been fair to all learners.”

Mr Swinney said pupils can challenge their results for free this year, adding: “I would encourage them to consider that evidence and to come forward”.