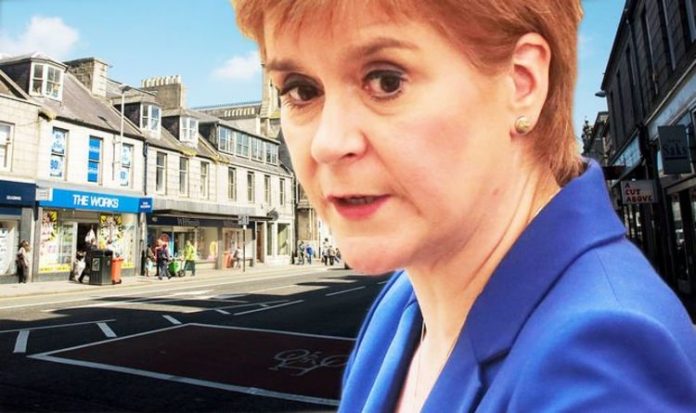 Extra police officers will be on the streets in Aberdeen to ensure residents comply with the reintroduced lockdown rules.

The closure will be backed by governmental regulations, the First Minister said, and will be enforced if the rules are not followed.

The First Minister added that the changes will be reviewed next Wednesday.

Ms Sturgeon said she then hoped they could be removed if they could, either in entirety or in part.

However, if necessary, the First Minister said that they could be extended beyond that seven-day period.

The First Minister told the briefing that she was aware the changes were”deeply, deeply unwelcome news”.

She added: “The last thing we want to do is to reimpose these restrictions but this outbreak is reminding us just how highly infectious COVID is.

“Our precautionary and careful judgement is that we need to take decisive action now, difficult as that undoubtedly is, in order to try to contain this outbreak and prevent further harm later on.

“As I said earlier, this is about doing all we can to ensure our children can return to schools next week.”

She added: “Acting now, we judge, gives us the time and the space to protect the ability of our young people to return to education.”

Ms Sturgeon made the announcement at the coronavirus briefing in Edinburgh.

The First Minister addressed the cluster in Aberdeen, where she said that 54 cases have been reported as of Wednesday.

She confirmed 191 contacts have been traced in relation to the cluster.

Extra police are set to be deployed on the streets of Aberdeen to enforce the measures.

“To support that, we will have additional patrols in Aberdeen, where local restrictions have been reintroduced.

“Our approach to these local restrictions will reflect the consistent approach taken by Police Scotland since the outset of this pandemic, and our officers will continue to engage, educate and encourage people to comply, as we all support the public health efforts to stop the spread of the virus

“As a national service, Police Scotland is able to quickly flex capacity to support local communities across the country and we will provide whatever additional resources are necessary to protect and support the communities affected.”

Ms Sutrgeon said the rise in cases added to the fear of a “significant outbreak” in the city.

She added that more than 20 other pubs and restaurants are involved in the cluster.

It comes after the SNP leader revealed there have been no coronavirus deaths in Scotland for the 20th day in a row.

A total of 2,491 patients have died in Scotland after testing positive for COVID-19.

There were 267 people in hospital with confirmed COVID-19, down by three.

Of these, three were in intensive care, no change.