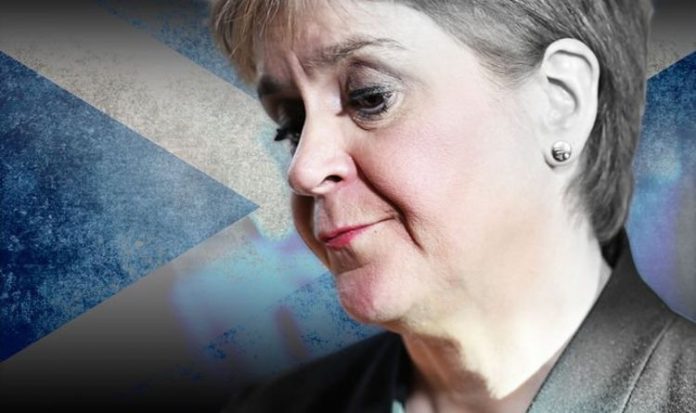 After the 2019 general election, in which the SNP won comfortably in Scotland, Ms Sturgeon formally requested powers from Westminster to hold a second independence referendum – but the notion was firmly rejected by the Prime Minister. Mr Johnson said in January: “You and your predecessor (Alex Salmond) made a personal promise that the 2014 independence referendum was a ‘once in a generation’ vote. “The people of Scotland voted decisively on that promise to keep our United Kingdom together, a result which both the Scottish and UK governments committed to respect in the Edinburgh Agreement.”

Without legislation passing through Westminster, another option for the SNP was a section 30 order – which allows Holyrood to pass laws in areas that are normally reserved to Westminster.

The aim for the SNP is to get a bill passed that gives Holyrood the power to hold a second independence referendum.

However, as public law expert Professor Aileen McHarg told Express.co.uk , there are a number of ways by which Westminster can thwart Ms Sturgeon’s plans.

Professor McHarg said: “One challenge is that the minister in charge of the bill has to certify that it would be within Holyrood’s competence.

“To do that, under the Scottish ministerial code, that has to be agreed to by the Lord Advocate – The Scottish Government’s law officer.

“The suspicion is that the current Lord Advocate isn’t willing to agree to that – this Lord Advocate can change but right now that’s one obstacle.”

However, the expert highlights how Mr Johnson could take a similar approach to that used in 2018 during the row over the UK Withdrawal from the European Union (Legal Continuity) (Scotland) Bill – known simply as the Scottish Continuity Bill.

READ MORE: Nicola Sturgeon to insist Indyref2 will be FINAL

The bill aimed to empower the Scottish Ministers to make amendments that would enable Scottish law to be aligned with EU law after the end of the Brexit transition period.

Professor McHarg continued: “Assuming a referendum bill is passed by the parliament, there is then a four-week period where both the UK and Scottish law officers have the opportunity to refer it to the Supreme Court for a ruling of whether it’s within competence or not.

“This happened with the Scottish Continuity Bill, the UK Government referred the bill to the Supreme Court which meant it couldn’t get royal assent and be enforced.

“It took several months for the Supreme Court to hear the case, and in the meantime the EU Withdrawal Act was passed and that reduced the legislative powers of the Scottish Government.

“There is no legal barrier to prevent the UK Government from attempting to do this. Whether or not it is a justifiable course of action would of course be a matter of dispute. I can imagine a lot of people would regard it as illegitimate.”

In June, a second continuity bill was introduced at Holyrood by Scottish ministers.

Constitution Secretary Michael Russell said: “The overwhelming majority of people in Scotland have consistently said they want to be in the EU and, despite Brexit, we are doing everything we can to stay close to our European partners.

“It is completely unacceptable that Scotland has been taken out of the EU but this bill will enable us, in devolved areas at least, to keep pace with Europe, when appropriate and practicable to do so.”

He added: “The bill’s proposals on environmental principles and governance will also help us to maintain high standards, in line with the EU, in Scotland.

“These important measures complement our Environment Strategy for Scotland vision, published in February, to help us as we protect and restore Scotland’s natural environment and strive to live within our planet’s sustainable limits.”