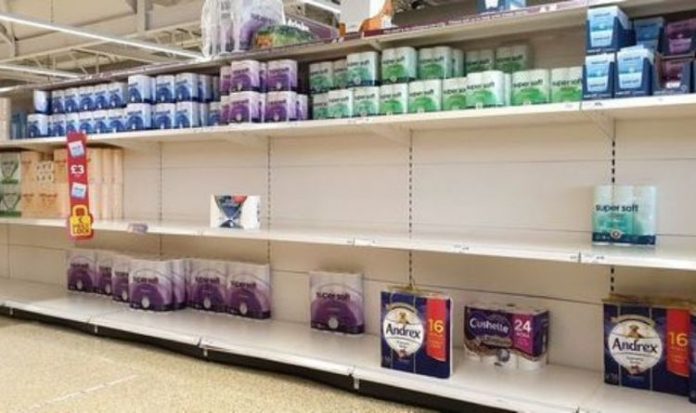 Shoppers are in a state of “absolute disbelief” after discovering basics such as bread, vegetables and meat were sold out at local outlets. Pictures on social media show entire aisles emptied of their contents and are accompanied by irritated captions from members of the public unable to purchase staple items.

Toilet roll, pasta and bottled water are selling particularly fast in some stores.

Many users on Twitter and Facebook are urging panic buyers to consider the elderly and other vulnerable people.

It comes hours after Prime Minister Boris Johnson gave a statement announcing new restrictions to curb the spread of coronavirus.

Elysium Sexsmith, a 41-year-old musician said empty toilet roll aisles in a Luton Lidl left him in a state of “absolute disbelief” on Monday evening.

She wrote: “Everyone stockpiling right now needs to stop what they’re doing – you’re being inconsiderate to the elderly people who still go shopping.

“The fact that all of you rush to the shops at once means there are a lot of people within a secluded shop at the same time. Covid-19 can spread.”

Another Twitter user, named Laura, said “Hope nobody was hoping to buy toilet roll from Tesco today”, accompanied with a photo of an empty shelf.

The 35-year-old said: “A gentleman bought about 30 bottles of water of two litres each.

“Another lady grabbed about 10 packages of pasta and a few sauces.

“I think it’s a rather selfish and an unnecessary overreaction, given that the supermarkets and shops won’t close during lockdown and I believe … will have enough supplies.”

Ratula Chakraborty, professor of business management at the University of East Anglia (UEA), said it is unclear how widespread the issue of panic buying is but it could “spiral out of control” without intervention.

She added: ”Unfortunately, some customers are going crazy in grabbing everything they can to put in their trolleys… in turn, this is encouraging copycat behaviour by other shoppers,”

“The result is empty shelves and the possibility of panic buying spiralling out of control.

“Shoppers will naturally think of their own needs and will fear losing out if they see other shoppers stockpiling.”