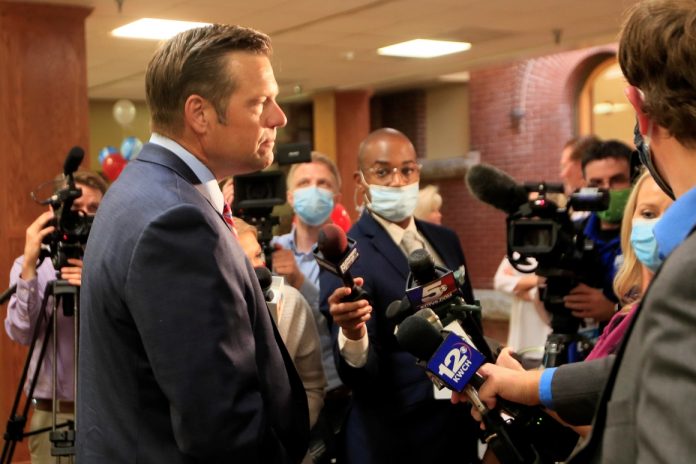 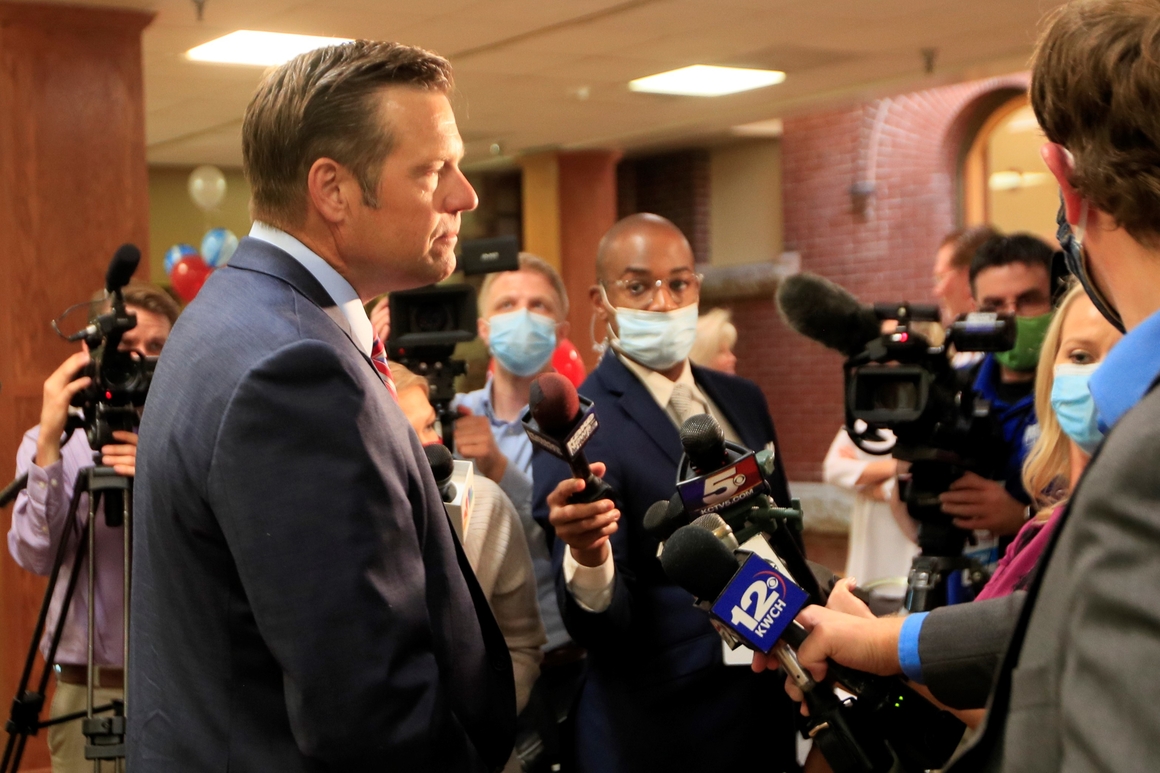 Republicans went into Tuesday’s primaries with problems lurking all over the ballot, but they ended the night thanking their voters for cleaning up a potential mess.

Democrats haven’t won a Senate race in Kansas in more than 80 years, but Kris Kobach as the GOP nominee threatened to make the state an improbable toss-up. Instead, Rep. Roger Marshall won the primary, giving the GOP a much more electable candidate to go up against a strong Democratic recruit.

In one of Kansas’ key congressional districts, indicted Rep. Steve Watkins was looking like a juicy target for House Democrats — but they won’t get the chance to run against him after state Treasurer Jake LaTurner ousted the freshman in a primary, boosting Republican chances of keeping the seat.

These weren’t just symbolic victories for the GOP establishment but ones that fundamentally boosted their chances in November, including their chances of keeping the Senate in Republican hands after watching their grip on the chamber weaken for months.

Meanwhile, Democrat Cori Bush’s primary win over Rep. Lacy Clay in St. Louis signaled the battle between the Democratic establishment and liberal outsiders has reached a new level: one in which even popular, progressive Black leaders are not immune from challenge.

All the ingredients were there for a GOP disaster.

There was a split, 11-candidate field with no dominant frontrunner. A controversial candidate in Kobach who won a seven-way gubernatorial primary two years earlier, only to blow it in the general election. Democratic meddling in the form of $5 million in TV ads that trashed Marshall and boosted Kobach.

And President Donald Trump — who aligns with Kobach on immigration and voting restrictions and endorsed him for governor the day before the 2018 primary — was sitting on the sidelines when a simple tweet could have swung the primary.

Instead, Marshall and his allies told Kansas Republicans they couldn’t afford to take another chance on Kobach, and they listened. When the night ended, Marshall had 40 percent of the vote, easily turning aside Kobach and the rest of the field.

Democrats say they can still contest the race with state Sen. Barbara Bollier, who was until recently a Republican, as their candidate. Bollier fits the mold of disaffected Kansas GOP voters — especially in Johnson County, outside of Kansas City — who have drifted from the party after the excesses of Trump, Kobach and former Gov. Sam Brownback.

According to private polling, Trump’s numbers in Kansas have softened, and Republicans can’t take the seat for granted even after Marshall’s victory. But it would undoubtedly have been a much bigger headache with Kobach as the nominee.

Even before Watkins narrowly defeated Democrat Paul Davis by 1 point to win his seat in 2018, some Republicans were plotting to defeat him in the 2020 primary.

Watkins won a seven-candidate primary two years ago with just 27 percent of the vote, a weak result that left him vulnerable to an intra-party challenge. There were questions about his personal life, along with some shady campaign finance tricks to push him across the finish line in November, including a super PAC funded by his father.

The news only got worse when he joined Congress. There was a Federal Election Commission investigation into his father’s alleged straw donations. And three weeks before the primary, Watkins was charged with felony voter fraud for listing a UPS Store as his home address on his voter-registration form.

It all became too much for Watkins to overcome. He only won about a third of the primary vote — about 15 points behind LaTurner.

LaTurner’s victory was a two-fer for Republicans: Not only did he rid them of Watkins and likely give the party a stronger candidate to keep the Topeka-area seat in GOP hands, LaTurner was originally running for Senate, where he threatened to split the anti-Kobach vote even further before jumping into the House race.

In the past two years, four white men holding urban, majority-minority House seats have been felled by younger, more liberal candidates of color. But the left hadn’t taken down an old-guard incumbent of color until Tuesday in St. Louis.

Bush’s victory came two years after Clay trounced her by 20 percentage points in a 2018 primary. It’s a sign that the recent protests over racial injustice and police brutality have altered Democratic politics — especially this year, and especially in a district that includes the city of Ferguson.

In 2014, when Ferguson police shot and killed Michael Brown, an unarmed Black man, both Bush and Clay became prominently involved. While Clay pushed legislation in Congress that would revoke federal funding from police departments that don’t require independent investigations into incidents involving officers, Bush became a leader of the protests.

After George Floyd’s killing in Minneapolis in May, the issue took on new salience. But Bush also had a better campaign and more funding this year — particularly after her appearance in a Netflix documentary alongside now-Rep. Alexandria Ocasio-Cortez (D-N.Y.) about their 2018 campaigns.

Just weeks after Ocasio-Cortez ousted then-Rep. Joe Crowley (D-N.Y.) in June 2018, she traveled to St. Louis to campaign with Bush. This time, Ocasio-Cortez, who serves on a House committee with Clay, didn’t get involved.

But Tuesday’s results suggest that with or without a national leader like the young congresswoman from the Bronx, the energy on the left is changing the makeup of the Democratic caucus.

Voting by mail scrambles a key piece of election night

On Monday morning, an analyst from the elections website Decision Desk HQ was the first person quoted in a New York Times column under the headline, “How the Media Could Get the Election Story Wrong.”

On Tuesday night, the site became a cautionary tale for November.

About an hour after polls closed in Missouri, Decision Desk HQ actually called the Clay-Bush race for Clay, based on the incumbent’s strength in the early votes cast in the district. But within three hours, the site was forced to retract that call and instead proclaim Bush as the winner, after she won on the back of much stronger support from people who voted in person.

The occasional error by an analyst or news organization “calling” an election is nothing new. But Tuesday’s results showed why the pandemic-era campaign — featuring more voting by mail, unusual new patterns in how absentee and in-person voters behave, and a vote count that could take weeks — is going to be even more perilous and require even more caution from those watching and interpreting the results.

Five weeks after voters in bright-red Oklahoma approved an expansion of Medicaid, voters in neighboring Missouri — another GOP bastion — approved a ballot measure that will provide health coverage to 230,000 of the state’s poorest residents.

Parson and state leaders scheduled the vote to coincide with Tuesday’s downballot primaries rather than the November presidential elections, and Medicaid expansion proponents accused the governor of trying to depress support for the measure by holding the vote during a lower-turnout election. Parson said it was necessary to vote sooner because of expected coronavirus impacts on the state budget.

Activists have increasingly adopted ballot measures as a way to overcome the opposition of politicians to popular initiatives. Ballots in the November general election are not yet finalized in many states, but expect to see a number of measures going directly to voters, including increases in state minimum wages; election reforms like independent redistricting commissions, all-party primaries and ranked-choice voting; and marijuana legalization.

The post Kobach and Clay go down: Takeaways from a big primary night appeared first on Politico.