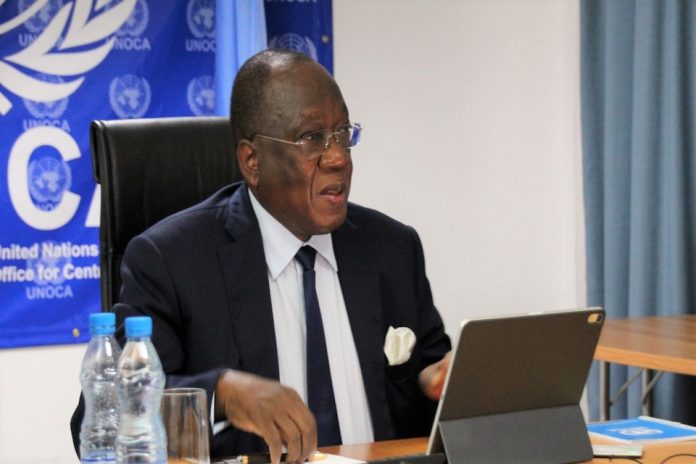 On behalf of the United Kingdom, I want to express our thanks to SRSG Fall for his continued efforts to support and promote peace, stability, and security in Central Africa, particularly under the difficult circumstances engendered by the COVID-19 pandemic.

We welcome the recent progress in the region, particularly the establishment of the new ECCAS Commission. But as SRSG Fall has set out, Central Africa continues to face serious political, economic, and security challenges, which have been exacerbated by the impacts of COVID-19. As ever, it remains important that the countries of the region work with the support of the UN, and together, to strengthen regional peace and security, protect civilians in conflict, and promote human rights and resilient to economic recovery.

In this regard, I commend UNOCA’s ongoing work on conflict prevention and mediation efforts across Central Africa. And I would encourage greater coordination between UNOCA and UN country teams in the sub-region, with a particular focus on strengthening early warning.

Mr President, the United Kingdom remains deeply concerned by the ongoing crisis in the North-West and South-West regions of Cameroon, which SRSG Fall described. The impacts on civilians continue to be profound. The conflict in this region has driven around 770,000 people from their homes and forced 60,000 people to seek refuge in neighbouring Nigeria. Only 30 percent of schools are currently open.

This conflict, compounded by the effects of COVID-19, has exacerbated humanitarian needs across the country. In September, the United Kingdom announced a further $6 million to fund humanitarian actors in Cameroon. This funding will provide vital assistance, including food, medical supplies, and sanitation provisions to tens of thousands of vulnerable people and brings our total humanitarian support to Cameroon in 2020 to $18 million.

We remain deeply concerned by reports of human rights violations and abuses committed by both security forces and separatists in the North-West and South-West regions. Among the many reported acts of violence against civilians, the killing of seven children by unidentified gunmen in Kumba in October was particularly shocking. We continue to support the Secretary-General’s call on all actors not to attack civilians, and we call for an end to violence and for unhindered humanitarian access.

The UK urges respect by all parties for human rights, including freedom of expression, association, and assembly. We continue to urge full cooperation by the Government of Cameroon with the office of the High Commissioner for Human Rights.

I commend the steps taken by the Government of Cameroon to address the crisis and respond to the recommendations, throughout the dialogue on October 2019, including the holding of regional elections on the 6th of December. These elections were an important step towards decentralisation. Inclusive dialogue remains and achieving a just, peaceful, and durable resolution to the North-West, South-West crisis, which meets the reasonable demands of the moderate majority. All parties should remain engaged in good faith, in dialogue and peacebuilding efforts, including the Swiss-led efforts to facilitate talks between the Government of Cameroon and separatist groups. I hope that Cameroon’s international and regional friends and partners will also continue to support efforts to restore peace and security in the North-West and South-West regions.

Mr President, The United Kingdom also strongly condemns the terrorist attacks on civilians in Cameroon’s Far North and across the wider Lake Chad Basin area. We express our condolences to the innocent lives lost, including the 70 civilians killed in Nigeria’s Borno state on the 28th of November. We welcome the efforts of the Multi-National Joint Task Force to tackle Boko Haram and Islamic State West Africa in the region. We urge the Governments of the Lake Chad Basin countries, with the support of international partners, to redouble their efforts to tackle the root causes of conflict. This should include efforts to improve governance, demobilise, and reintegrate former combatants, and mitigate the impacts of climate change on regional security.