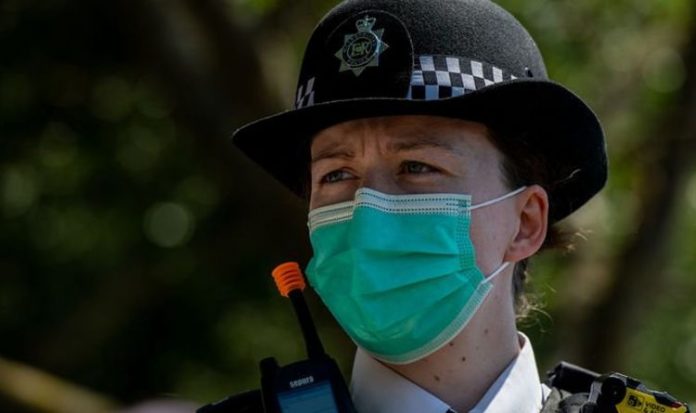 They have urged governments and firms to ban their “unnecessary” use in shops and recycle more single use PPE in medical settings. It is estimated that we are now going through 129 billion face masks and 65 billion plastic gloves every month as the world struggles to contain the coronavirus pandemic. Despite efforts by some firms to recycle the items, campaigners say 90 percent are ending up in the landfill – equating to more than a trillion face masks a year.

Dr Christian Dunn, a senior lecturer at the school of natural sciences at Bangor University in Wales, said: “It could be that they are having harmful effects on us and we need more research done as a matter of urgency on the potential danger of microplastics.

“The plastic waste issue is an environmental crisis and the PPE issue is only going to be fuelling it.”

He added: “Recycling plastic is one of the weapons that we have in the fight against the plastic waste problem.

“The Covid situation is hopefully going to go away but the plastic waste that it’s going to leave behind is going to be around for an awful lot longer.

“When you go shopping, the people that don’t have a specific medical condition and are low-risk – I don’t see why they are not reusing masks.

“Let’s look at masks in the same way that we have started to reuse plastic shopping bags.”

But governments “have a difficult tightrope to walk” when it comes to balancing the need to recycle while at the same time protect their citizens, according to entrepreneur Oliver Chapman.

Mr Chapman is the CEO of OCI Group, a global supply chain partner which has contracts to supply £500m worth of PPE to governments worldwide.

He explained: “It is vital to ensure that the waste from PPE consumption does not contribute to a larger environmental crisis. Governments worldwide have a collective responsibility to ensure this is dealt with effectively.

“It is a difficult tightrope to walk. While we are actively engaged in supplying large amounts of PPE equipment to protect health workers and the public, as an environmentally conscious company, we are strong advocates that the PPE we provide is not adding to the global plastic crisis.”

Antoinette Vermilye, the co-founder of the ocean conservation group Gallifrey Foundation, is calling for urgent action to stop the masks entering the oceans amid fears they are releasing cancerous chemicals into our food chain.

Most single use face masks are made of a recyclable plastic called polypropylene (PP).

But worrying studies have revealed dangerous chemicals called phthalates have been added to PP when it’s used to make plastic cups.

Miss Vermilye points to horrifying images of a penguin which was found dead on a Brazilian beach after eating a face mask and warns of further untold damage being caused to sea birds, dolphins and whales.

She said: “With many of these masks it’s not that people deliberately throw them in the environment, though some do.

“The most worrying thing for me is that many of these plastics have chemical additives so they can be given their form and shape and make them malleable.

“Endocrine disruptors are already linked with a number of conditions – fertility, obesity and cancer and that’s only on humans, no one has tested them on animals.”

She added: “If masks have these chemical additives it means that they have endocrine disruptors.

“It is a genuine worry of mine that they have them and we are breathing them in.

“It’s something that’s very rarely mentioned. I’m a mother, I had my kids when I was young I was doing things that I now kick myself for doing.

“I would warm up my milk bottles which were made of polycarbonates in the microwave. They had an endocrine disruptor and my son ended up with ADD. Is it because of that, it could be coincidental but I’m reading more about that and when I talk to endocrinologists they tell me it is.

“I think that’s an area that will become a bigger one.

“It’s a bit like smoking, everybody knows that they give them lung cancer but you need time to prove it. You increase your risks and it’s the same thing with endocrine disruptors.”