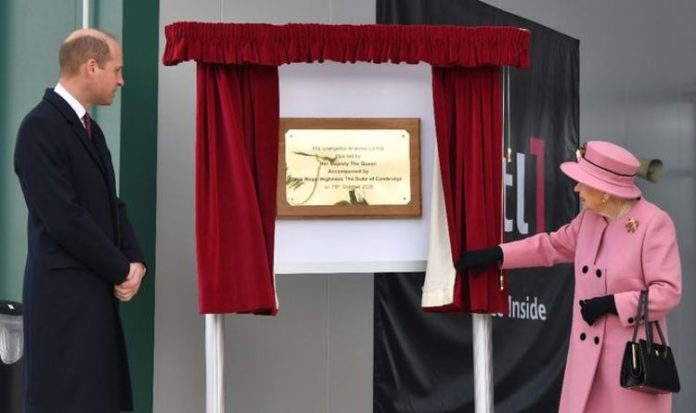 Her Royal Highness, 94, was accompanied by Prince William for the trip to Porton Down national security lab in Wiltshire. Neither wore masks but a palace spokesman said all Government guidelines had been followed.

Additionally, the 48 people who met the Queen had been tested for Covid-19 beforehand, and were all negative.

Kensington Palace declined to say whether William had been tested but it is believed he had.

Buckingham Palace said: “Specific advice was sought from the medical household and relevant parties, and all necessary precautions taken.” The Queen has been in a household of reduced staff, dubbed HMS Bubble, since March.

Yesterday, as she opened a £30million explosive materials research centre, she grimaced as she talked about coronavirus with Prof Tim Atkins.

The Queen said, “It’s doubling itself again,” then said, “Well, I suppose it was expected?” Prof Atkins, who is helping coordinate the UK’s response to the pandemic, said: “Predicted, Ma’am, yes.” She frowned as she replied: “All these horrible new things…”

Later she met a dog being trained to sniff out explosives.

Then, as the Queen signed the visitors’ book with William, she quipped: “Well, it proves we’ve been here, doesn’t it?”

Her Majesty wore a rose-coloured coat and dress by Stewart Parvin with a matching hat by Rachel Trevor Morgan for her 50-minute visit. She arrived and left on a helicopter, while William stayed for a further two hours and left in a car.