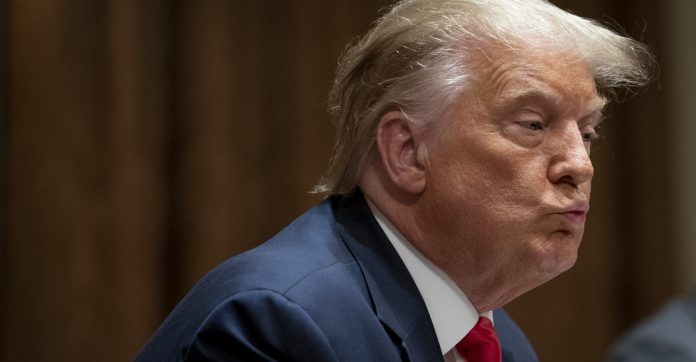 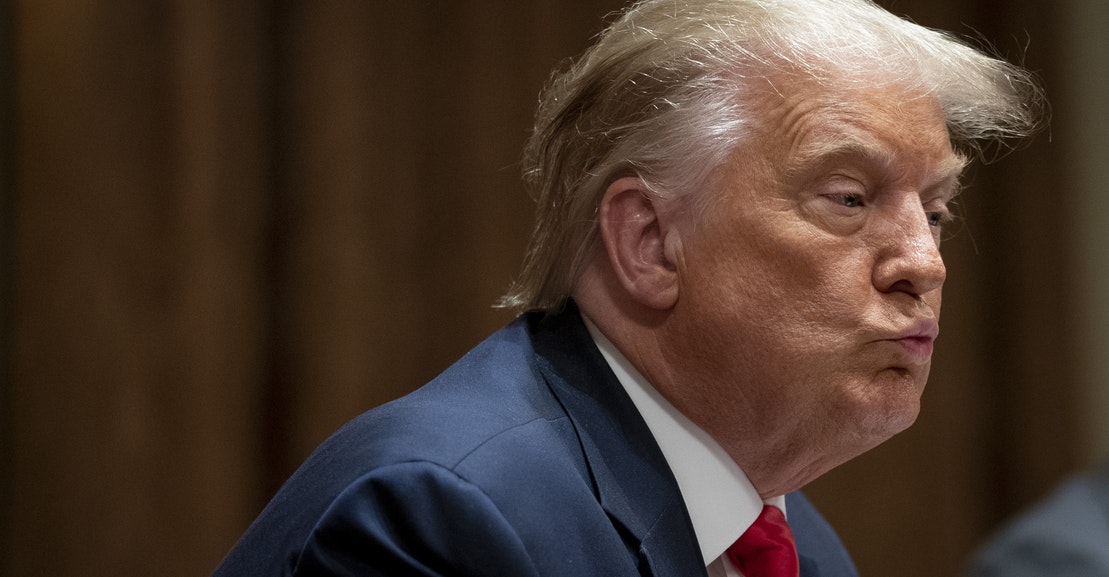 The most jarring thing about Donald Trump is that he is president. Nearly every press conference, public event, and interview is awash with contradictions. On the one hand, there is the man in the office: grotesque, incoherent, malicious, dumb. On the other, there are the rituals and aesthetic trappings that have grown around the office of the presidency itself, which all communicate its awesome power and solemnity. A lot of media coverage gets lost in these contradictions, as if reporters and camera operators can’t quite believe what they’re seeing: How do you capture—let alone hold to account—someone so ridiculous?

One of the many virtues of Axios’s Jonathan Swan’s interview with Trump is that it does away with much of that unearned solemnity. The interview, in which Trump claims, among very many other things, that John Lewis will be remembered for skipping his inauguration and that the Civil Rights Act of 1964 has failed, is not shot like a typical interview with a sitting president. Instead, it has the look of a sitcom. As many have pointed out, the rhythms of its edits, which cut between Trump’s relentless maundering and bullshitting, Swan’s increasingly incredulous reactions, and long, awkward shots of the two of them, most closely resembles HBO’s Veep.

“So much of Veep is often just sitting around thinking: ‘What’s the dumbest thing that could happen?’” wrote showrunner David Mandel in The Hollywood Reporter in 2017. The Trump administration “is doing stuff that we couldn’t invent if we tried.” Swan’s interview captures Trump as he is, which is to say at his dumbest. Nowhere is that clearer than in Swan’s line of questioning on the administration’s handling of Covid-19.

Swan is understandably baffled when Trump starts handing him print-outs, but it’s worth examining what he’s trying to do. The line of questioning is meant to get Trump to acknowledge one, simple point: that the United States is in the midst of a horrible pandemic that has killed more than 150,000 people and that all this has occurred under Trump’s watch as president of the United States.

With a different president, this would likely result in a response typically deemed as “presidential”: A homily about the gravity of the situation we are enduring collectively. “The unspoken question hovering over much of this was Swan pleading with Trump to share in our collective horror about the consequences that have unfolded since, and to take some measure of responsibility for those consequences,” wrote The Washington Post’s Greg Sargent about the interview. “This taking of responsibility would itself speak to the gravity of what the country is enduring, and show basic respect for the sick, the dead and the bereaved.”

Trump, of course, does not do that kind of thing. Instead, he engages in an endless series of evasions and lies, claiming that, actually, the United States is doing better than other countries when it comes to addressing the pandemic. The video is shot and edited in such a way that underscores just how removed Trump is from reality: He is less a president than someone playing a president—and not doing a very good job, at that.

The print-outs ultimately damage Trump more than he himself could. They’re a prop for the camera, but they also suggest that the administration is more interested in coddling the president and creating a comforting pseudo-reality than stopping a deadly pandemic. There has already been much discussion of how the presidential daily briefing has shrunk practically to the size of a Post-It note in order to accommodate a president with the attention span of a golden retriever. The print-outs show how Trump’s insecurities and shortcomings are dictating what information he receives. Having forgotten what he was supposed to say about the chart, Trump simply hands it to Swan. Swan takes one look at it and realizes instantly that it’s garbage: The list cites deaths as a share of coronavirus cases, not of the population as a whole. All Trump can do is stammer: “You have to go by—you have to go by—here, look. Here is the United States. You have to go by the cases.”

Something similar happens when Swan presses the president about the well wishes he extended to Jeffrey Epstein’s former girlfriend Ghislaine Maxwell, who was recently arrested on child sex-trafficking charges. This should have been a gift, a way for Trump to distance himself from a disastrous response to an earlier question. Instead, Trump doubles down. Sounding like someone with a bit part in Gotti, Trump repeats several times that he wished her well because Epstein “was either killed or committed suicide” in jail.

It wasn’t always like this. Less than two years ago, Swan sat down with Trump and beamed while the president praised him for acquiring a shiny little scoop about the administration’s plans to end birthright citizenship. That was access journalism at its worst, where the pursuit of scoops trumps everything. All the evidence suggests that access to Trump, already a distressed asset, will hit a post-2015 low in a couple months. It may simply be that, with Trump floundering, there’s little risk in making the president look bad. It also suggests that journalists have finally figured out the best way to interrogate the president: Treat him like a clown.

The post The Washington Media Is Starting to Treat Trump Like a Clown appeared first on New Republic.