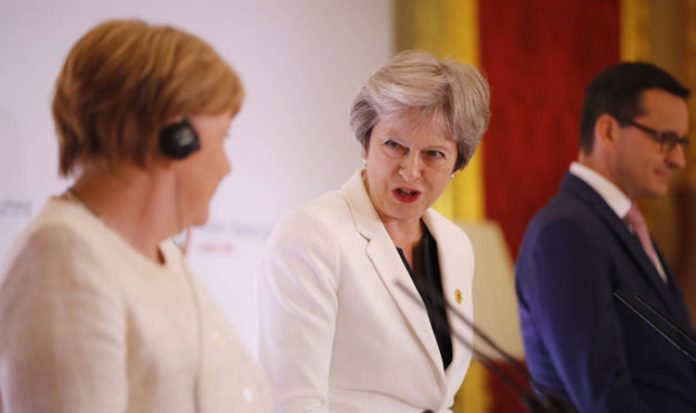 Mrs May was speaking after taking a short break from the turmoil within her government to meet Angela Merkel and other European leaders at the second day of the Western Balkans Summit in London.

She told a joint press conference after the Lancaster House event that Brexit would be “smooth and orderly”.

Mrs Merkel said Germany wanted to keep a close relationship with Britain after it left the European Union but said their would be a common response from the 27 member states to Mrs May’s Brexit White Paper which will be published on Thursday.

The German leader said she was pleased the latest proposals from London were now on the table.

She said: “We are looking forward to interesting discussions, but we will also have these discussions inspired by the spirit of friendship and the wish to have good relations in the future.”

Polish Prime Minister Mateusz Morawiecki said the Brexit negotiations were not easy but suggested Warsaw was satisfied with the progress that had been made.

Mr Morawiecki said Poland wanted a “very friendly relationship” with Britain and acknowledged a sudden and disorderly Brexit would be harmful for both Britain and the remaining 27 EU member states.

Mrs May, Mrs Merkel and Mr Morawiecki were joined by the leaders of of the six Western Balkan nations: Northern Macedonia, Montenegro, Serbia, Albania, Bosnia and Herzegovina, and Kosovo at the London summit.

Mrs May had announced a doubling of funding for the region from £41 million in 2018/2019 to £80 million in 2020/2021 ahead of the fifth annual summit, which focused on issues including corruption, organised crime and economic stability.

Downing Street said the money will be targeted at regional “security challenges”, particularly those around organised crime and drug smuggling, which have an impact on the UK.

Mrs May told the assembled leaders that the Western Balkans was “a region anchored to European democratic values and the rules-based international system” and “one that contributes to European security, stability and prosperity”.

Others who attended included the leaders as well as Mrs Merkel and Polish prime minister Mateusz Morawiecki.

Former foreign secretary Boris Johnson had been due to attend the first day of the summit yesterday but had resigned before his scheduled appearance.

Mrs May posed for photographs with Northern Macedonia president Zoran Zaev and his Greek counterpart Alexis Tsipras, who recently completed a deal to end a row over the former country’s name, which is also claimed by an area of Greece.

The Prime Minister had been urged to help Macedonia join the European Union during a visit to Skopje in May.

Mr Zaev asked Mrs May to help it achieve a “Euro-Atlantic future” as she became the first British premier to visit the Balkan country in almost two decades.