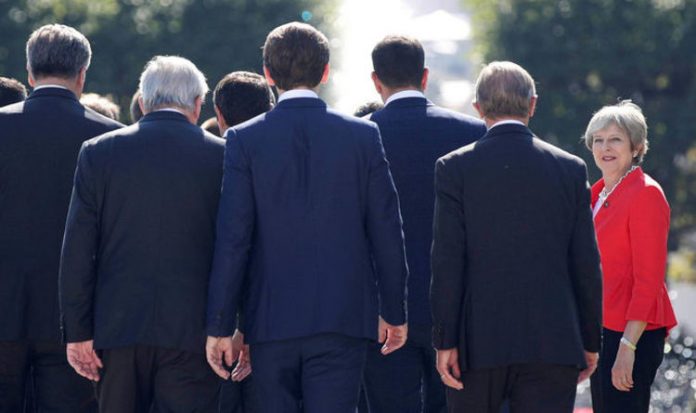 The Prime Minister said the EU’s move has left the UK with two unviable options.

She said staying in the European Economic Area and EU customs union would “make a mockery’ of the UK’s referendum as immigration would remain uncontrolled and the UK would be limited in its ability to trade freely with the rest of the world.

But the alternative – a free trade agreement with checks at the EU/UK border leaving Northern Ireland in the single market and customs union – was also criticised by Mrs May.

She said: “Northern Ireland would effectively remain in the Customs Union and parts of the Single Market, permanently separated economically from the rest of the UK by a border down the Irish Sea.

“Creating any form of customs border between Northern Ireland and the rest of the UK would not respect that Northern Ireland is an integral part of the United Kingdom, in line with the principle of consent, as set out clearly in the Belfast/Good Friday Agreement.”

Why has the EU rejected the Chequers plan?

The EU’s initial proposal was for Northern Ireland to remain in the customs union, effectively creating a customs border between it and the UK.

BREXIT NO DEAL MEANING: WHAT DOES A NO DEAL BREXIT MEAN FOR THE UK?

Under the Chequers plan, Mrs May had proposed a “backstop” customs systems with a new “facilitated customs arrangements in order to avoid a hard Irish border.

This would keep the UK in the customs union with the EU temporarily but also allow it to make treaties with the rest of the world until a permanent solution was agreed.

But European Council president Donald Tusk said the plan needed to be “reworked” at an informal summit in Salzburg on Thursday.

He said: “We reconfirmed that there will be no Withdrawal Agreement without a solid, operational and legally binding Irish backstop. And we continue to fully support Michel Barnier in his efforts to find such a model.

THERESA MAY BREXIT NO DEAL: IS THE UK HEADED FOR A NO DEAL?

“Second, we agreed to have a joint political declaration that provides as much clarity as possible on the future relations.

“Everybody shared the view that while there are positive elements in the Chequers proposal, the suggested framework for economic cooperation will not work. Not least because it risks undermining the single market.”

With both sides at loggerheads, the possibility of a no deal becoming a reality has been raised.

Mrs May warned the EU need to provide concrete recents for its refusal of the Chequers plan and would not agreed to anything separating the UK from Northern Ireland.

She said: “It’s not acceptable to simply reject the other side’s proposals without a detailed explanation and counter proposals

“So we now need to hear from the EU what the real issues are, what their alternative is, so that we can discuss them. Until we do, we cannot make progress.”

Arlene Foster, leader of Northern Ireland’s Democratic Unionist Party, said this afternoon the DUP would interject if necessary over the customs union issue.

She said: “Any new regulatory barrier would be a matter for the Northern Ireland Assembly, where the DUP would veto any attempt to undermine the economic or constitutional integrity of the United Kingdom.”