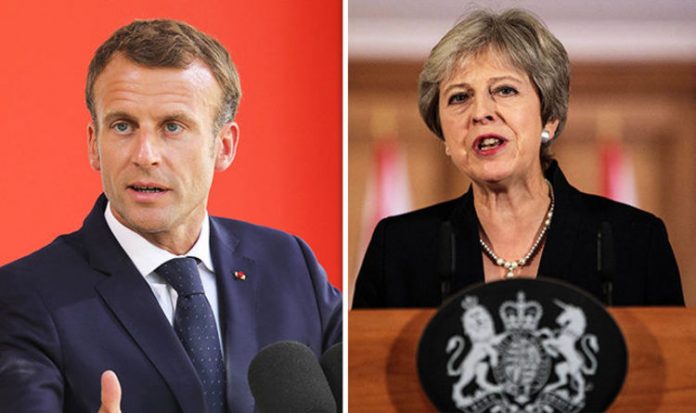 In a remarkable speech at Downing Street today, Prime Minister Mrs May refused to abandon her divisive Chequers plan for Brexit.

She also took aim at EU leaders by issuing a stern warning that their approach to the divorce negotiations was “not acceptable”.

Mrs May refused to back calls for a second Brexit referendum and insisted a hard border would never be imposed in Northern Ireland.

She said: “For over two years I have worked day and night to deliver a deal that sees the UK leave the EU.

“I have worked to bring people with me even when that has not always seemed possible. No one wants a good deal more than me.

The EU should be clear: I will not overturn the result of the referendum. Nor will I break up my country.

But French president Emmanuel Macron refused to issue a response to her remarks, with his spokesman simply saying: “No comment.”

Labour leader Jeremy Corbyn said Theresa May had shown herself to be “incapable of delivering a good Brexit deal”.

In a furious attack on the Prime Minister, he said: “Theresa May’s Brexit negotiating strategy has been a disaster.

“The Tories have spent more time arguing among themselves than negotiating with the EU.

“From day one, the Prime Minister has looked incapable of delivering a good Brexit deal for Britain.

“The political games from both the EU and our Government need to end because no deal is not an option.”

But he urged the Government to ditch the Chequers proposal and come forward with a Canada-style free trade agreement.

The North East Somerset MP said: “There is still no reason to suppose that Chequers can work either for the UK or the EU.