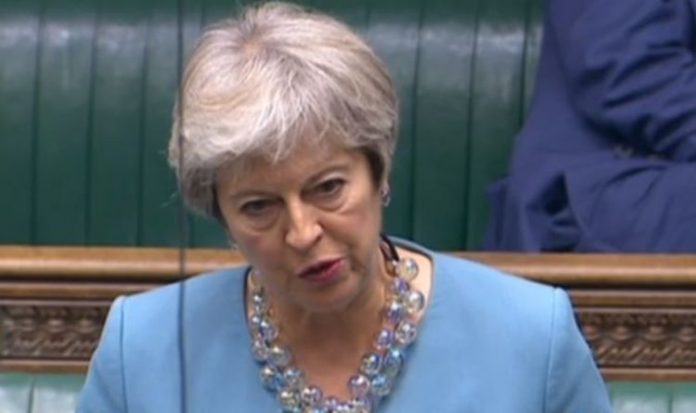 Theresa May hit out at Prime Minister Boris Johnson as she lamented changes to the internationally-binding Northern Ireland protocol could harm the UK’s global standing. Mr Johnson is expected to outline technical amendments to the the Withdrawal Agreement Bill some analysts have suggested would allow the Government to override the exit deal struck with the European Union last week. But the former Prime Minister, who saw her tenure come to an end over oppositions to her proposed arrangement for Northern Ireland last year, warned of severe consequences if the changes were to go ahead.

“This Parliament voted for the withdrawal agreement into UK legislation. The Government is now changing the operation of that agreement.

“Given that, how can the Government reassure future international partners that the UK can be trusted to abide by the legal obligations of the agreements it signs?”

Mr Lewis insisted the UK had worked with Brussels “in a spirit of good faith” to ensure the Northern Ireland protocol can be implemented if a trade agreement is struck.

But the Northern Ireland Secretary insisted the UK needs to ensure back-up measures are in place to protect the internal market should talks with the EU fail to produce a deal.

“Of course, our first aim continues to be to secure agreement on the protocol for the joint committee and the wider free-trade agreement but the withdrawal agreement and the protocol are not like other treaties.

“It was written on the assumption that subsequent agreements could be reached between us and the EU on the details. That is the entire purpose of the specialised joint committee.”

European Research Group (ERG) chair Bernard Jenkin called on the Prime Minister to stand ready to “repudiate” the withdrawal agreement should Brussels persist with their “unreasonable interpretation” of the deal.

In a statement released on Tuesday, Mr Jenkin said: “If we don’t reach a deal with the EU, Brexit is not done until the UK government succeeds in its determination to assert its own interpretation of the Withdrawal Agreement.

“If the EU is unwilling to do a deal with us, there are two options. The first is to enact domestic legislation that will largely nullify the direct effect and direct applicability of EU law. We have the mandate and majority to do this.

“Second, if the EU insists on an unreasonable interpretation of the Withdrawal Agreement, the UK must stand ready to repudiate it.

“I hope it is not necessary, but if it is the only way to achieve UK prosperity and the kind of sovereign independence which is the democratic right of any nation recognised under the UN Charter, then so be it. And most other nations would respect us for that.”