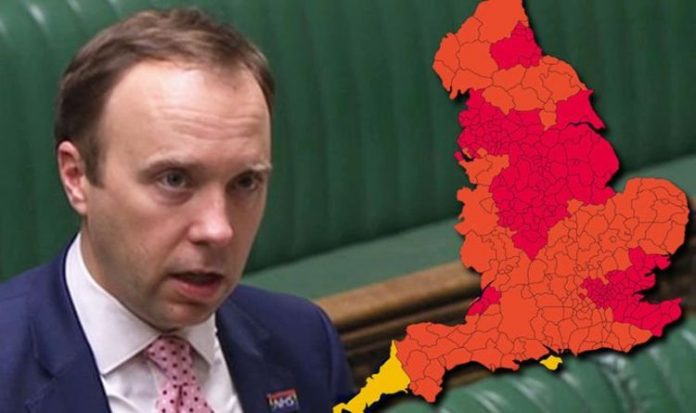 The tier system in England was rolled out after the second national lockdown ended on December 2. The Government has now undertaken its first review of the tiers in effect and has moved some regions into the highest coronavirus restriction tier. Express.co.uk has created a map to show which areas of the UK will be in Tier 3 from Wednesday.

The announcement today means more than 60 percent of England will be in the toughest tier from Wednesday.

Speaking from the House of Commons, Mr Hancock said: “The virus remains just as dangerous as it has always been.

“The average daily hospital admissions are up, 13 percent.

”The latest figures show that the average daily pieces have risen by 14 percent in the last week, and we’re seeing a sharp rise in South Wales in London, and parts of the east and southeast of England.”

READ MORE: Essex Tier 3: What parts of Essex are in Tier 3?

Mr Hancock said a new variant may be responsible for the rapid spread of coronavirus across southern regions.

He said: “We have identified a new variant of coronavirus, which may be associated with the fastest spread in the south-east of England.

“Initial analysis suggests that this variant is growing faster than the existing variants.

“We’ve currently identified over 1,000 cases with this variant, predominantly in the south of England, although cases have been identified in nearly 60 different local authority areas, and numbers are increasing rapidly.”

He added the World Health Organization has been notified of the virus and said it was unlikely the variant will be immune to the vaccine.

Mr Hancock said: “must stress at this point that there is currently nothing to suggest that this variant is more likely to cause serious disease and the latest clinical advice is that it’s highly unlikely that this mutation would fail to respond to a vaccine, but it shows we’ve got to be vigilant and follow the rules and everyone needs to take personal responsibility not to spread this virus.”

DON’T MISS
Tier 3 lockdown: Towns in London, Essex and Hertfordshire in tier 3 [INSIGHT]
Tier 3 rules: How does it differ from Tier 2? [EXPLAINER]
Tier 3 rules: What does Tier 3 mean for London? [ANALYSIS]

The Health Secretary said the Government’s mass testing will continue to be expanded in a bid to drive down the rate of coronavirus cases.

He said another 67 local authorities will receive community testing this week.

Mr Hancock said this would assist areas to “move down tiers” and return living closer to normal.

He finished his statement by saying that people must not waver “as we enter the final stretch”.

READ MORE: London to be plunged into Tier 3 on Wednesday announces Matt Hancock

Yorkshire and The Humber