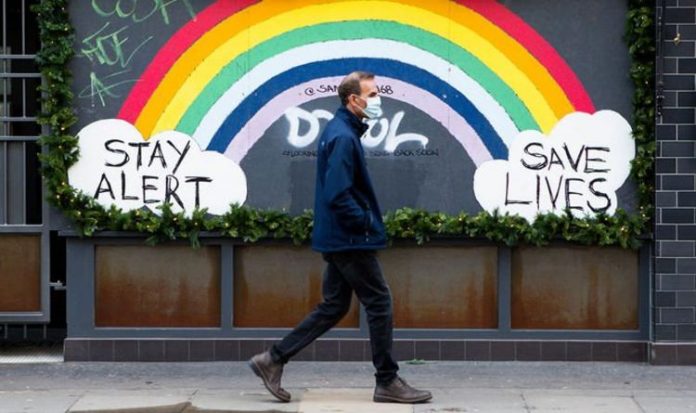 Some 24 million people are now living under the harshest lockdown restrictions after new tier changes came into force on Boxing Day. But Covid cases are still seeing a sharp rise up and down the country, with a further 30,501 people testing positive on December 27. Government data shows a total of 248,199 positive test results in the past seven days – up 30.1 percent compared to the previous week. Deaths within 28 days of a positive result are also on the up, with 316 yesterday and 3,351 in the last seven days – bringing the UK total to 70,752.

With 43 percent of the UK already living under the strictest rules, some have questioned why the UK Government hasn’t imposed Tier 4 on the entire UK.

Dr Zubaida Haque, a member of Independent Sage, tweeted: “Given that we surpassed 70,000 Covid-19 deaths in UK on Christmas Day, and there are now more patients with coronavirus in hospital than at any point in the pandemic, why hasn’t the government implemented Tier 4 restrictions everywhere in the UK? Independent Sage are very worried.

“Given the crisis situation we’re in with the highest number of daily deaths with Cover 19 in second wave, with 1000’s more likely to be infected because of relaxation of rules in tier 1-3 on Christmas Day AND failed govt’s test & trace system, we need Tier 4 everywhere now to save lives.”

And now it seems Boris Johnson’s Government is in talks over what to do next and could be considering the creation of yet another tier – little more than a week after the Prime Minister dropped the bombshell of Tier 4 on the nation.

A senior Whitehall source told Express.co.uk: “We are ruling nothing out, the new strain is of serious concern. Tier 4 appears to not be strong enough.”

The source stressed we could see new measures which would essentially be “adding another level onto Tier 4, so like a Tier 5.”

“We keep this under review, we are constantly hearing from our scientific advisers about what we should do.”

The rules are akin to the second national lockdown saw in November.

So if a Tier 5 was created, it may mean a return to rules seen in the first lockdown – such as only being able to leave your home for food shopping, medical reasons and for your one hour a day of exercise.

At yet, there’s no indication of what a Tier 5 lockdown could include, or which areas would be hit by any new restrictions.

But social media users have already began speculating what Tier 5 could involve – and with hilarious responses.

Sharing a screengrab from an episode of The Simpsons which shows a large glass dome being placed over a town, one wrote: “The UK in 2 weeks time #Tier5.”

Another shared an image of a fridge full of beer, with the caption: “Getting ready for #Tier5.”

And one posted a throwback to hit reality TV show Big Brother, saying: “Tier 5 is Davina McCall standing outside your house and telling you it’s time to nominate someone to leave your bubble.”