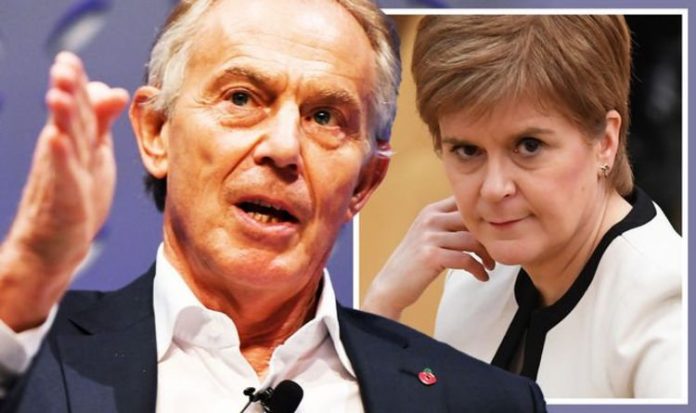 Boris Johnson hits out at SNP’s handling of devolution

Calls for Scottish independence ramped up this week after the Scottish National Party’s (SNP) National Executive Committee (NEC) published a paper outlining that an independence referendum deadline of March 31 must be set for Westminster in advance of the Scottish Parliament election in May. The deadline would include the requirement to agree to a “section 30 request” which would transfer power to Holyrood for a referendum. Should Prime Minister Boris Johnson refuse to accept the order, the paper says Ms Sturgeon and the SNP must make independence the “focus” of the upcoming Holyrood election campaign, in May.

The SNP have spent the past six years slowly building up another case for breaking away from the UK following former leader Alex Salmond’s failure to win enough support in the 2014 referendum.

He said it was a “once-in-a-generation” ballot, a point which Mr Johnson has used in his refusal to entertain the idea of a second referendum.

Calls for Scottish independence have lingered for decades.

Paul Embery, a leading trade unionist and Labour member, said the feeling for breaking away was very much the reason why former Labour Prime Minister Tony Blair embarked on his mass devolution programme after coming to power in 1997.

Mr Blair himself went as far as to tell Holyrood magazine in 2019 that had he not rolled-out devolution North of the Border, “you might have had an independent Scotland by now”.

Nicola Sturgeon: The First Minister is being urged to pursue independence in the May elections (Image: GETTY)

Yet Mr Embery told Express.co.uk that it was this very push for devolution by Mr Blair’s New Labour that has led to Britain’s current constitutional crisis.

He said: “I think the strength of feeling for independence in the devolved administrations, Scotland, Wales, Northern Ireland, tends to grow when the Tories are in Westminster.

“Many people in those countries are not Tories and see the Tories as the enemy and see independence as some sort of escape from it.

“But in many respects I think the genie’s out of the bottle.

“Ironically, the whole point of the New Labour Government under Tony Blair, bringing in devolution 20 years ago, was because it felt there were moves towards independence, and actually devolution was a way of choking it off, choking off any campaign for independence.

JUST IN: Johnson told devolution ‘genie out of bottle’ as Sturgeon pushes plans

Labour: Blair rolled-out vast devolution to all corners of the UK to halt calls for independence (Image: GETTY)

“But actually, I think the opposite has happened, it’s added momentum to the campaign for independence.

“So I don’t think that genie’s going to go back in the bottle.”

Although, Mr Embery added: “I don’t necessarily think it’s inevitable, but I don’t think the strength of feeling for independence is going to dissipate any time soon.”

In December, he announced the party would open a “constitutional commission” that would spread devolution to all corners of the UK should Labour win power in the 2024 general election.

Ms Sturgeon branded him a “constitutional tinkerer” on hearing the plans.

She added that Scottish Labour had no chance of challenging the SNP’s dominance in Scotland.

Steven Fielding, Professor of Political History at the University of Nottingham, noted that the move was a sign Sir Keir is conscious of potentially losing many Scottish seats it hopes to win back in four years time.

He told Express.co.uk: “As we speak we know that there is a majority in Scotland, and an increasing one for independence.

“Sir Keir’s plans are about Scotland, not Wales or Northern Ireland.

“As things stand, the one argument the SNP has, the strongest one it has, is a Tory Government led by Boris Johnson.

“If things remain the same, it’s very likely they’ll push for a referendum in the future and they’ll win it.

“Starmer’s argument is that if we don’t say we’re going to devolve power, as a kind of way to keep the Scots in the union, they’re going to leave – he’s the only leading politician that wants a union and wants to do something about it.”

However, he shared a similar sentiment to Mr Embery, and said: “Whether it works or not, I don’t know – it might be too late.”

Mr Blair has previously revealed the struggles he had in steamrolling ahead with devolution plans across the union.

In Wales, he faced fierce opposition from within Labour, telling the BBC in 2017 that it had been a “considerable” battle.

Although heavily criticised, devolution in both Wales and Northern Ireland appears to have appeased calls for independence referendums.

However, campaigners for the Yes Cymru group have in recent months garnered substantial support for an independence vote.

The issue is more complicated in Northern Ireland with its complex historical and political backdrop.

Meanwhile, despite the strength of opinion in favour of independence in Scotland, the SNP itself could soon scupper hopes.

Last week, former SNP leader Alex Salmond accused Ms Sturgeon of misleading Parliament over an inquiry into the handling of sexual assault claims against him.

Politico noted that the move not only put at risk, “the reputations of two of the leading figures in Scotland’s secessionist cause, but the future of the independence fight itself”.