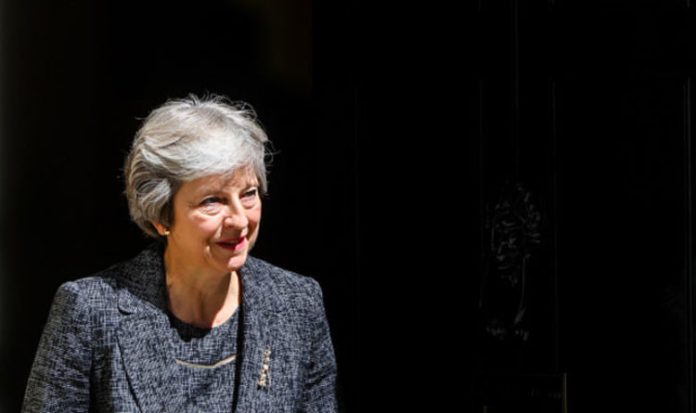 The YouGov survey, carried out between Wednesday and Thursday, found 39 percent of people said they would vote for Theresa May’s Conservatives – up one point compared with last week when both parties were on par with one another.

The question of who would make the better prime minister has also seen defiant Mrs May jump ahead by seven points giving her a 14 point lead over Mr Corbyn.

Some 36 percent say they would chose Mrs May as premier, up four points, while 22 percent chose Mr Corbyn who was down by three.

The findings were Mr Corbyn’s lowest over who would make the best prime minister and Labour’s lowest overall score in voting intervention since last year’s snap general election.

The Labour Party has been embroiled in a long-running row over anti-semitism which reared its head again last month when it emerged Mr Corbyn shared a platform with activists who compared Israel to the Nazis during a Holocaust Memorial Day event he hosted in 2010.

While Mr Corbyn apologised, he refused to adopt all 11 internationally recognised examples of anti-semitism into the Labour code of conduct.

In April 2016, Labour MP Nassem Shah shared a Facebook post supporting the relocation of Israel to the United States.

The same month Ken Livingstone was suspended from the Labour Party after he claimed Adolf Hitler “was supporting Zionism before he went mad and ended up killing six million Jews”.

Head of the Labour Party’s disputes panel, Christine Shawcroft, resigned in March after it emerged she had opposed the suspension of Peterborough council candidate, Alan Bull, who was accused of Holocaust denial.

In April, more than 2,000 examples anti-semitic content from private pro-Corbyn Facebook groups had been uncovered in an investigation by The Sunday Times.

That same month Mr Corbyn attended an event with radical Jewish group Jewdas, who had tweeted that “Israel is itself a steaming pile of sewage which needs to be properly disposed of”.

And on Tuesday a video emerged in which he warned the BBC was “biased” in saying that “Israel is a democracy in the Middle East, Israel has a right to exist, Israel has its security concerns”.

The YouGov poll also showed the Lib Dems were unchanged at 10 percent and Ukip was also up by one point to seven percent.

On the subject of the June 2016 EU referendum result, 42 percent believe Britain was right to vote leave.

Up to 45 percent think the UK should have voted to remain.