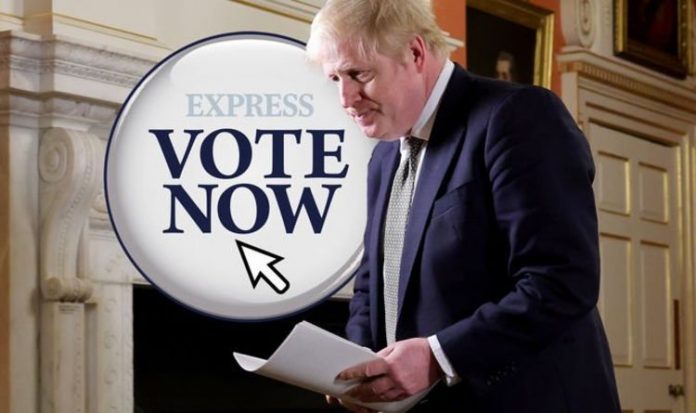 Now in the third national lockdown, backbench MPs have hinted the Prime Minister is beginning to lose faith within his party. Steve Baker, former head of the powerful backbench European Research Group (ERG), last month privately told colleagues the Prime Minister’s future will soon be on the table if he cannot navigate a way out of the lockdown. Mr Baker is one of many MPs who have voiced their concern over the economic damage caused by yet another lockdown and the restriction to civil liberties.

Amid the possible threat to Mr Johnson’s tenure, Express.co.uk is asking: “Who do you think should take over from Boris Johnson?”

Mr Baker, MP for High Wycombe and part of the Covid Recovery Group, told colleagues in mid-January: “It’s inevitable the prime minister’s leadership will be on the table.

“People are telling me they are losing faith in our Conservative Party leadership.”

If Mr Johnson were to resign or lose a vote of confidence, Chancellor Rishi Sunak has been tipped as one of the leading contenders to take the reins in No10.

Mr Sunak became incredibly popular with voters after drawing up several measures such as the furlough scheme to protect businesses.

He also won public support for the ‘Eat out to Help Out’ plan to try and aid restaurants during the pandemic.

Like Mr Sunak, Home Secretary Priti Patel, Foreign Secretary Dominic Raab and Health Secretary Matt Hancock would also be frontrunners in any race due to their positions in Cabinet.

Mr Raab has been a long time ally of the Prime Minister since assuming his position in 2019.

In contrast, Ms Patel and the Health Secretary have both come under scrutiny since they took up their respective positions.

Ms Patel has been criticised by civil servants in the Home Office and has been accused of bullying staff.

Mr Hancock too has come under pressure for the pandemic and the high death toll in the UK which is one of the highest in the world.

Another contender for the role could be Cabinet Office minister Michael Gove, who did compete in the 2019 Tory leadership contest which Mr Johnson eventually won.

Tory leadership: Mr Raab will be one of the main contenders (Image: GETTY)

Although not in Cabinet, former Health Secretary and fellow 2019 leadership challenger Jeremy Hunt may also contest the role should it occur.

However, during his time as Health Secretary Mr Hunt came under fire from junior doctors over extended hours before being promoted to Foreign Secretary in Theresa May’s Cabinet.

International Trade Secretary Liz Truss may also join the race after winning praise from her party for how she has gone about shaping the UK’s post-Brexit trade future.

Although the UK is yet to secure a trade deal with the US, Ms Truss has signed landmark deals with Japan, Canada and Mexico while agreements with Australia and New Zealand will soon be finalised.

Current minister for the Middle East and North Africa, James Cleverly, has also been included in the list of contenders and has been a staunch supporter of the Prime Minister and briefly stood in the 2019 leadership contest.

He served as both Chancellor and Home Secretary under Mrs May and also attempted a leadership bid in 2019.

Other contenders could be Tom Tugendhat, MP for Tonbridge and Malling, who has become an outspoken critic of China and is also the chair for the Foreign Affairs committee.

Paymaster General and former Defence Secretary Penny Mordaunt has also been tipped to enter any race, as has current Leader of the House Jacob Rees-Mogg.

Like Mr Javid, Ms Mordaunt was a part of Mrs May’s Cabinet throughout her time in office while Mr Rees-Mogg became chairman of the ERG in 2018.