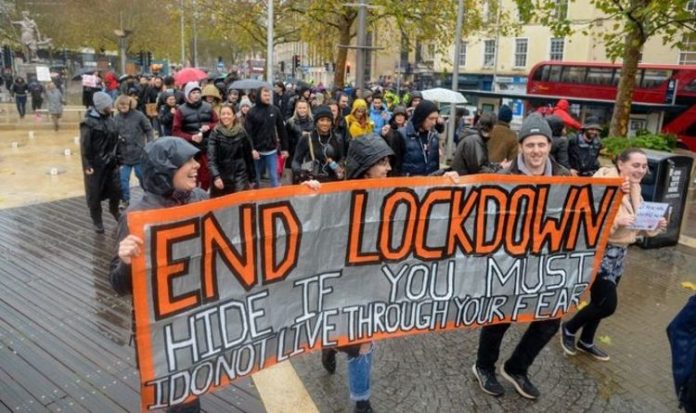 The activists find themselves in the unusual position of siding with Tory backbenchers in opposition to the Government on the issue of personal freedom. Liberty was opposed to the renewal of the Coronavirus Act – which survived a rebellion by 32 furious Tory MPs – and is now calling for the legislation to be axed.

A spokeswoman said: “The Government has an obligation to take steps to protect people’s lives and this involves restrictions on individual freedoms.

“But in times of crisis, states have a habit of going too far.

“Viruses are not cured by removing people’s rights and freedoms, but that is exactly what our Government has done – treating the pandemic as a criminal justice issue, prioritising immigration control over human life and failing to protect the marginalised.

“Liberty has always supported proportionate action to protect lives. This isn’t that.

“The Government needs to scrap its current coronavirus policies and focus on a response that protects our rights.”

The group has also backed the rights of protesters with hundreds of people being arrested during anti-lockdown demonstrations since the restrictions came into force in England on November 5.

This follows the arrests of almost 200 people under coronavirus legislation at a protest in London last weekend and a further 24 in Manchester.

Liberty said: “We must be able to protest without the threat of arrest – even in the context of a pandemic

“These arrests are concerning but they’re part of a wider campaign by this Government to weaken and water down our right to protest.

“Any move to criminalise protest would be extreme and potentially unlawful, and we urgently need the Government to clarify this right will be respected.

“This is critical when seen in the context of a long-term campaign to undermine this fundamental right.”

The human rights group’s stance has echoes of the one taken by a new Tory resistance movement known as the Covid Recovery Group.

The backbench group, led by former chief whip Mark Harper and ex-Brexit minister Steve Baker, is understood to have grown substantially since its launch last Wednesday and now numbers around 70 MPs – many of whom initially backed the current restrictions.

Mr Harper said: “The cure we’re prescribing runs the risk of being worse than the disease.

“The Covid Recovery Group will play its part in helping the Government to deliver an enduring strategy for living with the virus, so that we break the transmission of the disease, command public support, end this devastating cycle of repeated restrictions and start living in a sustainable way until an effective and safe vaccine is successfully rolled out across the population.”

Mr Johnson has argued the four-week lockdown is needed to prevent an “existential threat” to the NHS and said he expects England to return to a local tiered system when the measures end on December 2.

But he will face continued resistance from the Covid Recovery Group in the commons if he tries to extend any severe measures.

It has outlined three “guiding principles” calling on ministers

to undertake a cost-benefit analysis of restrictions, to end the “monopoly” of advice from Government scientists and to improve measures to tackle COVID-19 such as test and trace.