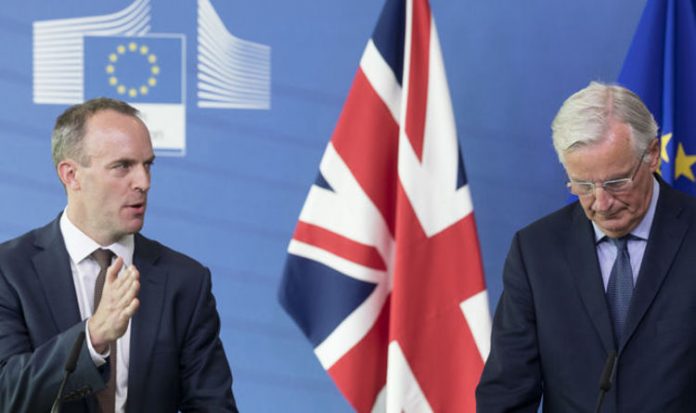 Meanwhile UK-based legal expert Victoria Hewson, of pro-Brexit think tank the Institute for Economic Affairs, has warned unless a workable solution was incorporated into the mooted withdrawal agreement, the EU could effectively “annexe” Northern Ireland into the customs union and single market.

Optimism began rising on the back of comments by Brexit secretary Dominic Raab that the EU and the UK were “closing in on workable solutions to the outstanding issues”.

Coming as this did after EU Brexit negotiator Michel Barnier’s indication that a deal was possible within six to eight weeks, there was speculation that an agreement might be close.

However, EU diplomats have been busy pouring cold water on the suggestion, with one saying: “This expectation is totally wrong.”

Very little if anything would be decided in Austria, another told The Sunday Times, adding: “The less that comes out of this summit, the better for everyone.”

Diplomatic sources have also said nothing will happen until after the Conservative Party conference, which starts in Birmingham on September 30.

British Prime Minister Theresa May is committed to the concept of a backstop agreement to prevent a hard border between Northern Ireland and the Irish Republic.

However, Britain and the EU have different concepts of how this would work in practice.

The EU wants an arrangement which would mean Northern Ireland effectively staying in the EU customs union and large parts of the single market.

Mrs May regards this solution as completely unacceptable, as do her allies in the Democratic Unionist Party, who have the power to sink her coalition government.

The situation has been deadlocked for months, with Mr Barnier saying in June: “Let me be clear: our backstop cannot be extended to the whole UK.

“Why? Because it has been designed for the specific situation of Northern Ireland.”

Ireland’s top diplomat in Brussels, Declan Kelleher, said on Friday: “The backstop in no way changes the constitutional status of Northern Ireland within the UK.

“It’s not a border in the Irish Sea.

“Essentially it would involve addressing issues such as technical controls at the ports between Northern Ireland and Great Britain that already exist.”

In a podcast uploaded to the IEA’s website on Thursday, Ms Hewson stressed the complexities of the situation.

She said: “The Irish backstop as detailed in the withdrawal agreement would not be a fudge.

“It would be legally binding and it would apply in perpetuity whatever agreement was reached.

“If the Chequers plan was worked into an agreement, the Irish backstop would continue in force.

“If the EU considered that we had departed from the common rulebook or standards they could involve the Irish backstop and essentially annexe Northern Ireland into the customs union and single market.”