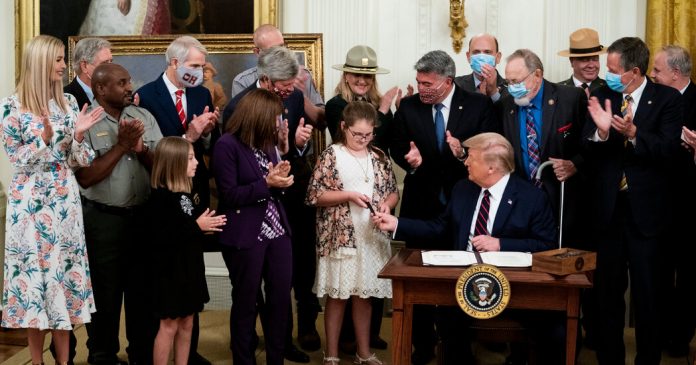 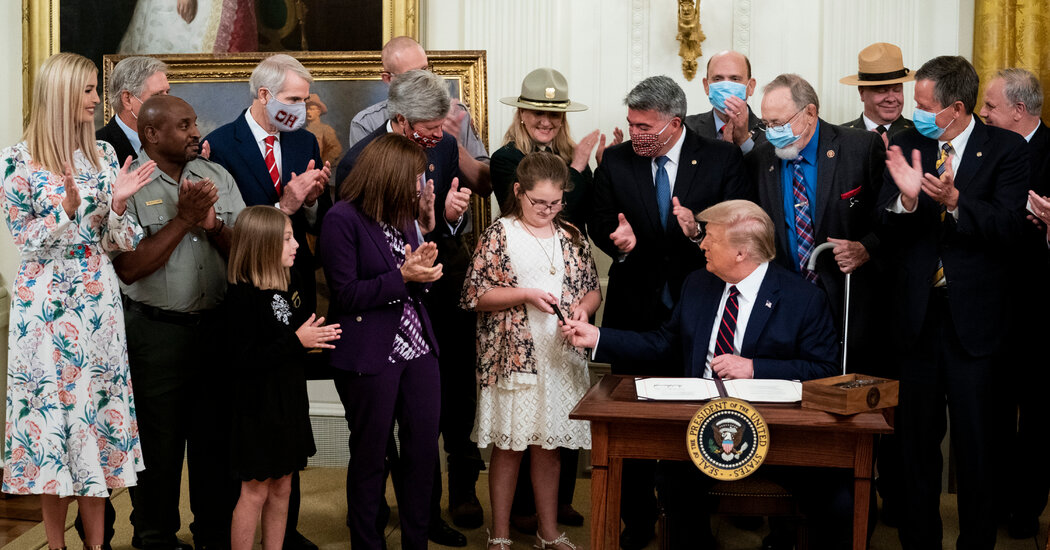 WASHINGTON — President Trump on Tuesday signed into law the Great American Outdoors Act, a measure with broad bipartisan support that guarantees maximum annual funding for a federal program to acquire and preserve land for public use.

Mr. Trump — who has exited the Paris Agreement on climate change, loosened restrictions on toxic air pollution and removed climate change from a list of national security threats — heralded the new law as a groundbreaking environmental achievement that he deserved credit for.

“From an environmental standpoint and from just the beauty of our country standpoint, there hasn’t been anything like this since Teddy Roosevelt, I suspect,” he said at a bill-signing ceremony at the White House.

“At some point, they’ll have to start thinking about the Republican Party and all of the incredible things we’ve done on conservation and many other fronts,” Mr. Trump said.

The act, which allocates $900 million a year to the Land and Water Conservation Fund and provides up to $9.5 billion over five years to begin clearing up a maintenance backlog at national parks, was approved on a 310-to-107 vote in the House. It was introduced last year by Representative John Lewis, the Georgia Democrat and civil rights leader who passed away last month.

But no Democrats were invited to the signing ceremony, which was attended by six Republican senators and three Republican congressmen, in addition to senior administration officials. Mr. Trump did not mention Mr. Lewis or any of his Democratic colleagues in his remarks.

When asked why Democrats were not invited or acknowledged, Kayleigh McEnany, the White House press secretary, said that “the only thing we’re recognizing about congressional Democrats right now is how appalling it is that there are Americans going who are going without paychecks because they refuse to partner with Martha McSally, Republicans and the president to make sure those payments go out.”

Ms. McEnany was referring to the stalemate on Capitol Hill between Republicans, including Ms. McSally of Arizona, and Democrats as they negotiate another round of federal aid to address the coronavirus pandemic.

Mr. Trump was persuaded to support the bill by two Senate Republicans from Western states — Senator Cory Gardner of Colorado and Senator Steve Daines of Montana — who are facing tough re-election battles and saw the measure as helpful to their states and their electoral chances. Mr. Daines and Mr. Gardner met with the president last year and told him that signing the measure would give him a significant conservation legacy.

“That was a meeting that took place, and within about a minute, I was convinced,” Mr. Trump said on Tuesday. “And I wasn’t at all convinced before I walked in.”

Even as he tried to bill himself as an environmentalist with a legacy that would rival Mr. Roosevelt’s, the president also demonstrated a lack of familiarity with one of the country’s most famous national parks.

He bungled the pronunciation of Yosemite National Park in California, referring to it as “yo Semites” as he read from his prepared remarks, creating an instant viral moment that was mocked online by the Democratic National Committee.

And on the same day that Mr. Trump signed the measure, his eldest son, Donald Trump Jr., and Nick Ayers, a former chief of staff to Vice President Mike Pence, publicly expressed their opposition to the administration’s longtime efforts to open the Pebble Mine, a large gold and copper mine in Alaska.

Trump officials concluded last month that opening the mine would not pose serious environmental risks, a reversal of the Obama administration’s position. Mr. Ayers and the president’s son wrote on Twitter that they wanted Mr. Trump to direct the Environmental Protection Agency to block the Pebble Mine opening.