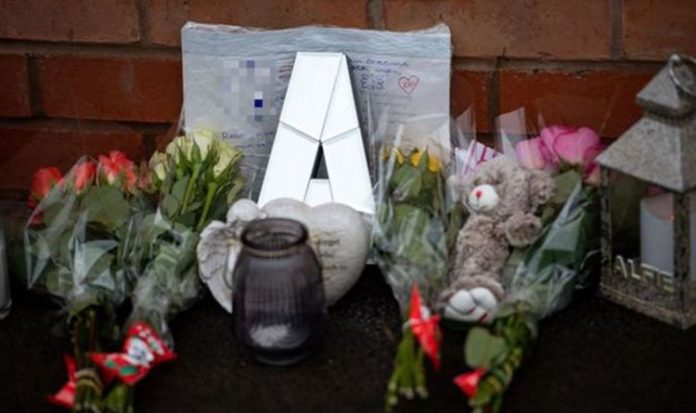 The child, named locally as Alfie Scott, was taken to hospital in critical condition at about 3pm on Thursday, after officers were called to the semi-detached property in Droitwich, Worcestershire. A 39-year-old man who was arrested on suspicion of murder has been bailed until March 19.

A 33-year-old woman arrested on suspicion of child neglect has been bailed to the same date.

Neighbours said the school boy, who was a member of The Boys’ Brigade, was carried out of the property “lifeless” by a medic.

He lived at the address with his mother and siblings – a brother and two sisters, aged between four and 12, they said.

The boy, who was described as a “cheeky chappie” by neighbours, was airlifted to hospital, but later pronounced dead.

Police said the cause of death is not yet known and they are continuing to treat it as unexplained.

Blue teddies and hearts have been placed in windows about the town as the community deals with the scock of the incident.

He said: “I think as a community we’re a bit rocked by it. We just feel for him and it’s nice everyone in the community is thinking of him.”

A spokesman for West Mercia Police said: “We are continuing to treat this as an unexplained death and are supporting the victim’s family at this time and would ask they are given privacy during this tragic event.”