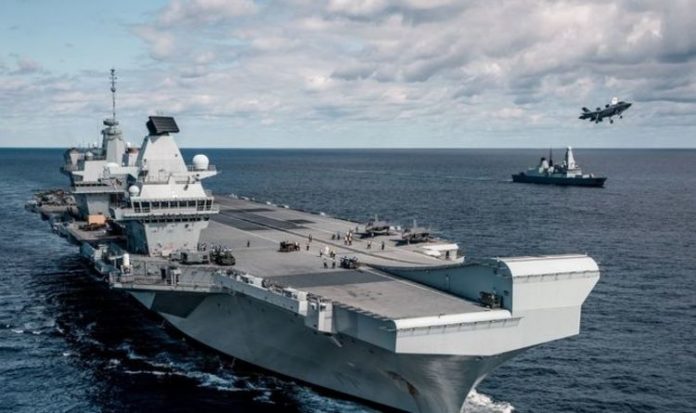 The £3.2billion aircraft carrier is currently spearheading NATO exercises in the North Sea after joining a Royal Navy Carrier Strike Group for the first time since being commissioned. And there are growing calls for the 65,000 tonne warship to be sent to Asia where China and many of its neighbours are locked in a series of increasingly bitter territorial disputes and the US expands its military presence amid growing fears of armed conflict.

If we want to go and uphold the freedom of navigation in the South China Sea, we can take partners

Defence Secretary Ben Wallace has suggested British military leaders could deploy HMS Queen Elizabeth to the South China Sea to conduct freedom of navigation patrols alongside the US and European allies.

“If we want to go and uphold the freedom of navigation in the South China Sea – which all of the European countries agree with – when our carrier goes there one day we can take partners.

“We can take the Dutch or the Danish or whoever wanted to support that international rule of law issue.”

HMS Queen Elizabeth could be deployed to the South China Sea (Image: PA)

China’s looming presence is never far from the minds of Western military leaders and only last week the head of the British army hinted at the possible expansion of training in the Indo-Pacific region from an established foothold in Brunei.

General Sir Mark Carleton-Smith avoided any direct mention of China or its frequent muscle-flexing but said the British military needed a “more persistent presence” in Asia.

General Carleton-Smith, the Chief of the General Staff, suggested RAF bases and the Royal Navy’s new aircraft carriers could provide “lily pads” from which the army could operate with allies.

Speaking ahead of the Government’s Integrated Review of foreign, defence and security policy, which is expected to report in November, he said: “We think there is a market for a more persistent presence from the British Army in the Far East.

“It’s an area that saw a much more consistent army presence in the 1980s but with 9/11 we naturally receded from it.

“We think now might be the time to redress that imbalance.

“If we are going to see a UK presence in the region from Royal Navy Carrier Strike Groups I would like to see some of those naval assets disembarking elements of the British Army for their own training in that part of the world.”

Britain is keen to strengthen military ties with countries such as India, Japan and South Korea in response China’s increasingly aggressive foreign policies and attempts to exert its influence on smaller, neighbouring states.

General Carleton-Smith said a more persistent British presence in the region will “change narratives, provide reassurance to allies and deterrence for adversaries”.

He said: “They will give the UK more strategic choice and influence.”

North East Scotland MP Andrew Bowie has joined the growing number of voices calling for the Royal Navy to show its strength in the South China Sea by increasing its presence in the region.

The former naval officer said the MoD had to “open its eyes to the glaringly obvious,” stressing that they should “step up to the plate” and deploy HMS Queen Elizabeth to the pacific.

Mr Bowie said: “The size of the Chinese fleet and its rate of growth should be a clear warning of China’s determination to become a maritime superpower.”

The Tory MP warned China’s navy had expanded significantly since 2014, with the communist state’s fleet consisting of 335 vessels.

He said: “With the renewed rejection in July by both America and Australia of China’s territorial and maritime claims in the South China Sea, it is time that a truly global Britain steps up to the plate and meets this unwarranted and illegal encroachment with renewed assertiveness.”

“Protected by a ring of advanced destroyers, frigates, helicopters and submarines, and equipped with fifth generation fighters, HMS Queen Elizabeth is able to strike from the sea at a time and place of our choosing; and with our NATO allies at our side, we will be ready to fight and win in the most demanding circumstances.

“Carrier Strike offers Britain choice and flexibility on the global stage; it reassures our friends and allies, and presents a powerful deterrent to would-be adversaries.”