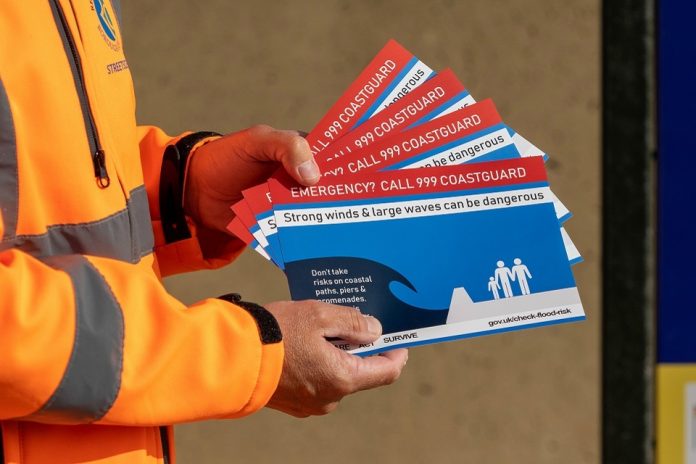 A new partnership campaign to keep people safer along the North East coastline has been launched by the Environment Agency, HM Coastguard and Redcar and Cleveland Borough Council.

The campaign slogan reads “Don’t take risks on coastal paths, piers and promenades. No selfie is worth your life”.

These important messages can be seen on new stickers that are being placed in a variety of different locations along the Redcar and Cleveland coastline in public car parks, bus shelters and on visible notice boards positioned along the seafront.

The North East coastline has some of the most beautiful and stunning seascapes, which are enjoyed by residents, ramblers and visitors to the region. But due to the ever changeable weather conditions including high winds, heavy rain and rough seas brought upon by the very nature of the coastal climate – people always need to be made aware of the dangers that come hand-in-hand with the area.

Our incident room team closely monitor the daily weather forecasts that are used to predict if we need to issue flood alerts or warnings across the region for situations like tidal surges or increased rain fall. This is coupled by Environment Agency officers working closely with individuals, organisations and partners in the region to ensure the key messages about flood awareness are relayed.

Know what to do in an emergency

These new stickers are a simple but effective method of letting people know about the dangers of the sea and what people need to do in an emergency.

You often see on the news that members of the public, of differing ages, have been swept into the water either by watching the waves or having tried to rescue a loved one or family pet, after they’ve fallen into the sea and become distressed. We want people to stay safe and at the same time enjoy our North East coastline.

Stormy weather can make our seas particularly dangerous and unpredictable. Large unexpected waves and swells are a major risk and can catch people out.

People need to be aware that the coastline will be exceptionally treacherous during storms. The large swell will mean that areas normally accessible at low tide may be cut off by storm surges. Coastal paths, piers and promenades may be inundated with surface flooding and large waves. Even a small wave has the force to wash you into the sea. Remember no footage, photograph or selfie is worth risking your life for. In an emergency at sea or on the coast, or if you think someone may be in difficulty, always call the Coastguard by dialling 999.

READ  Kamala Harris' show of support to Meghan Markle before royal exit: 'We are with you' | Royal | News (Reports)

Please download a copy of this simple flood plan so you’ll know what to do when there’s a flood warning in your area. It also provides a useful check list of essential actions and items that you might require if faced with a flood situation.