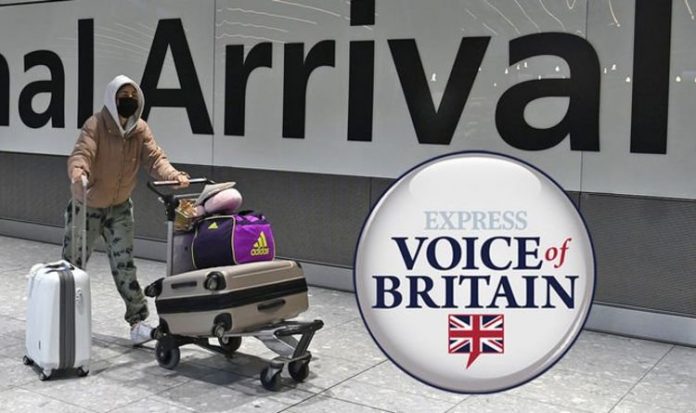 Readers voted in our poll on whether people coming into Britain should have to quarantine in hotels. Some 71 percent of respondents said yes, while 28 percent disagreed and one percent did not know.

Commenting on the poll, one reader fumed: “What about staying at home in the first place, it’s like nothing has changed as far as air travel is concerned.”

Another blasted: “The ONLY people who should be inconvenienced by the covidiots who insist on travelling in the midst of a lethal pandemic, should be the covidiots themselves (at their OWN cost).

“NOT the people whose lives they put at risk with their personal and selfish contribution to increased global transmission.”

A third insisted: “The borders should be shut, and it should have been done a long time ago……”

Another added: “No one should be coming in the first place, not even to a hotel.”

A fifth commented: “This should have been happening since last March.

“This is the only thing I think Boris has got wrong.

“Australia are still doing it and they are not far off being back to normal.”

He said: “We have to realise there is at least the theoretical risk of a new variant that is a vaccine-busting variant coming in, we’ve got to be able to keep that under control.

“With this vaccination programme, we’ve done I think 6.3, 6.4 million people now in the UK as a whole.

“We are on target just, just, we’re on target to hit our ambition of vaccinating everybody in those vulnerable groups by the middle of February.

“We want to make sure that we protect our population, protect this country against reinfection from abroad.

“That idea of looking at hotels is certainly one thing we’re actively now working on.

“We need a solution that gives us the maximum possible protection against reinfection from abroad.”

Health Secretary Matt Hancock told a Downing Street press conference: “I think it is incredibly important that we are cautious at the border.

“It is important that we protect from new variants should they have vaccine evasion, and it is also reasonable to take a precautionary principle to protect this country whilst we work on the science and the analysis of the different variants that are discovered around the world.”