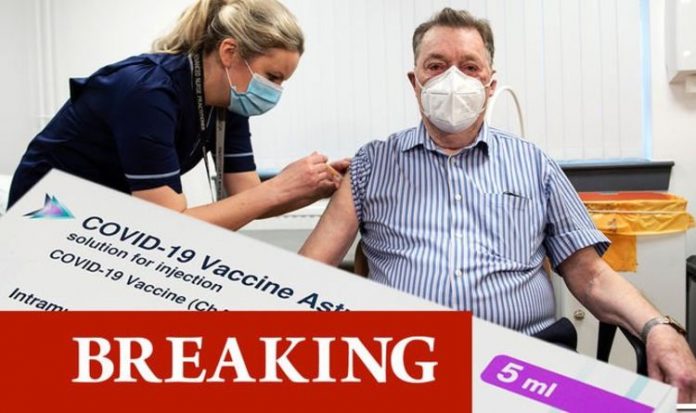 Today, German media Handelsblatt claimed the coronavirus vaccine is only eight percent effective in fighting the deadly virus. Political correspondent of the publication, Gregory Waschinski made the claim.

He went on to say how if his claim is confirmed when approved by the EU the vaccine “would practically not be applicable to risk groups”.

The pharmaceutical company have lashed out at the claims arguing they are “completely incorrect”.

A spokesperson for the company said: “Reports that the AstraZeneca/Oxford vaccine efficacy is as low as eight percent in adults over 65 years are completely incorrect.

“In the UK, the JCVI supported use in this population and MHRA included in this group without dose adjustment in the authorisation for emergency supply.

AstraZeneca lash out at German claims of efficacy (Image: Getty)

“In November, we published data in The Lancet demonstrating that older adults showed strong immune responses to the vaccine, with 100 percent of older adults generating spike-specific antibodies after the second dose.”

Mr Waschinski went on to say his publication “confirmed” the eight percent efficacy.

He tweeted: “We have confirmed the eight percent with multiple sources familiar with the German vaccination policy.

“Our sources, including members of the government coalition, spoke on the condition of anonymity so we cannot source the story ‘on the record’ nor can we make public any underlying data.”

Despite the AstraZeneca vaccine already being rolled out across the NHS as well as another countries such as India and Brazil, it has yet to be approved by the EU’s drug regulator.

But according to the BBC, it is expected to get the green light at the end of this month.

This comes just days after their decision to slow down supplies of the vaccine to the EU were branded “unacceptable”.

AstraZeneca announced they would not be able to meet agreed supply targets due to an issue with a plant in Belgium.

But Stella Kyriakides, the bloc’s health commissioner, said in a statement: “This new schedule is not acceptable to the European Union.

“The European Union has pre-financed the development of the vaccine and the production and wants to see the return.

“The European Union wants to know exactly which doses have been produced by AstraZeneca and where exactly so far and if or to whom they have been delivered.

“The answers of the company have not been satisfactory so far.

“The European Union wants the ordered and pre-financed doses to be delivered as soon as possible.

“And we want our contract to be fully fulfilled.”

A spokesperson for the pharmaceutical company said the “initial volume will be lower than originally anticipated” without giving further details.

Their statement blamed the discrepancy on “reduced yields at a manufacturing site within our European supply chain”.

Brussels has since threatened to cut off supplies of vaccines to Britain in response to anger over the bloc’s slow roll-out of Covid jabs.

She accused its CEO Paschal Soriot of breaching their “contractual arrangements” to supply up to 400 million doses to EU capitals.

And EU Council chief Charles Michel has raised the prospect of taking legal action against any firm failing to deliver on its promises.