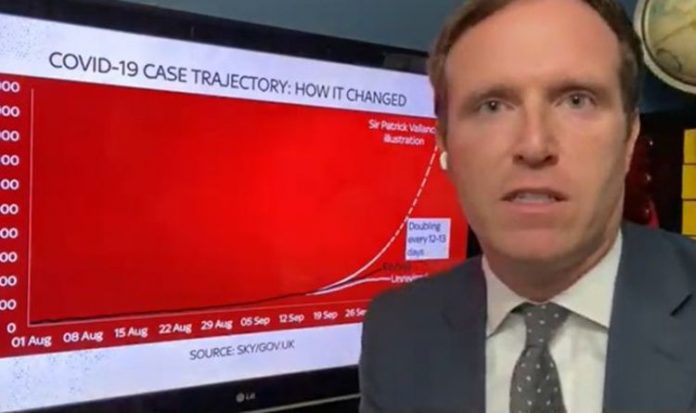 Fears over the UK’s increasing coronavirus cases were sparked at the end of September by the Government’s own Chief Scientific Adviser, Sir Patrick Vallance. The expert had warned that the country could could see 50,000 new cases a day by mid-October without further restrictions. However, Sky News’ Economics Editor, Ed Conway, produced a graph showing that Britain was still “quite far away” from Sir Patrick’s “terrifying” illustration.

At a joint press conference with the Chief Medical Officer for England, Professor Chris Whitty, the Chief Scientific Adviser had called for measures to be taken to stop the almost-weekly doubling of coronavirus cases.

Using a chart, Sir Patrick showed how the number of coronavirus infections would increase at an “exponential rate” from September 15.

This forecast showed a line rising steeply until it reached 50,000 new cases as a seven day average by October 10.

But Sky’s Mr Conway showed that with the UK’s most recent COVID-19 figures, the number of cases was much less at about 5,000 new cases a day on average.

READ MORE: Coronavirus may have infected 1 in 100 young Britons as cases fall

Even with the new 20,000 cases reported yesterday, the outcome would still be very different to Sir Patrick’s initial forecast.

The Sky journalist explained: “It would no doubt be a steeper curve.

“But it’s not quite as steep at Sir Patrick Vallance’s.

“His illustration was showing cases doubling every seven days.”

The IT failure was reported to have been a problem with an Excel spreadsheet.

It was blamed for the delay in the reporting of almost 16,000 coronavirus cases.

Prime Minister Boris Johnson has been unable to say how many contacts have been missed as a result of PHE’s testing error.

Health Secretary Matt Hancock will be making a statement regarding the issue in the House of Commons.