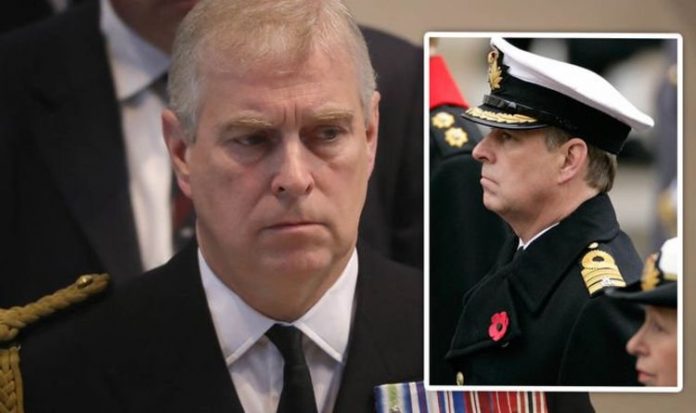 Chances Prince Andrew will be among the royals at the pared-down National Service of Remembrance this year are very slim, according to royal commentator Nigel Cawthorne. The author of Prince Andrew, Epstein, Maxwell and the Palace told Express.co.uk: “There is but a sliver of a chance that Prince Andrew will attend the ceremony at the Cenotaph this Remembrance Sunday.

“Prince Harry and Meghan are attracting all the flack aimed at the Royal Family at the moment as a result of the commotion about their fly-on-the-wall documentary for Netflix.

“The last thing the Palace wants is to have everyone looking closely at what is negative about the HRHs in this country.”

A source claimed earlier this week the Duke and Duchess of Sussex had agreed to be part of a fly-on-the-wall documentary for Netflix.

The rumoured programme, branded a reality show by commentators, would have followed Meghan and Harry carrying out their philanthropic work.

Meghan and Harry have since denied they are taking part in any reality show.

Their representative said: “The Duke and Duchess are not taking part in any reality shows.”

Despite the ongoing coronavirus pandemic, Remembrance Sunday is still to be celebrated this year at the Cenotaph.

Buckingham Palace has yet to finalise plans for the stripped-down commemorations, but it is highly likely the Queen will oversee the commemorations from the balcony of the Foreign and Commonwealth Office building in Whitehall, as she has been doing for the past three years.

Prince Philip is unlikely to be at her side, having stepped down as working royal in August 2017.

Prince Charles, the heir apparent to the throne, will likely be laying a wreath on the Queen’s behalf.

Many senior royals, including the Cambridges, the Wessexes and Prince Andrew, usually take part in the ceremony either by joining members of the Army or from the balconies in Whitehall.

But in the midst of the Epstein scandal, royal aides were “agonising” over the possible presence of the Duke of York, according to a source.

They told the Daily Mail: “There has been behind-the-scenes agonising over the Cenotaph issue because of the Duke’s history of service, but matters have now been taken out of everyone’s hands.

“Her Majesty the Queen and the Prince of Wales will lead the nation’s tributes in a pared-down event.

“However, unless matters change dramatically, no one believes we will ever see the Duke of York in the royal line-up on Remembrance Sunday again.”

Prince Andrew stepped back from public duties in November last year, after a now-notorious interview with Emily Maitlis focused on his association with convicted sex offender Jeffrey Epstein.

Prince Andrew, who wholly denies any allegations in relationship with the Epstein case, was accused by royal watchers and commentator to have failed to express sympathy for the victims of the former financier.

He also shocked many viewers and Ms Maitlis herself saying he did not regret “as a whole” his association with Epstein.

The Duke of York hasn’t appeared at a public service or royal engagement ever since the interview aired, and has only been spotted in public a handful of times.