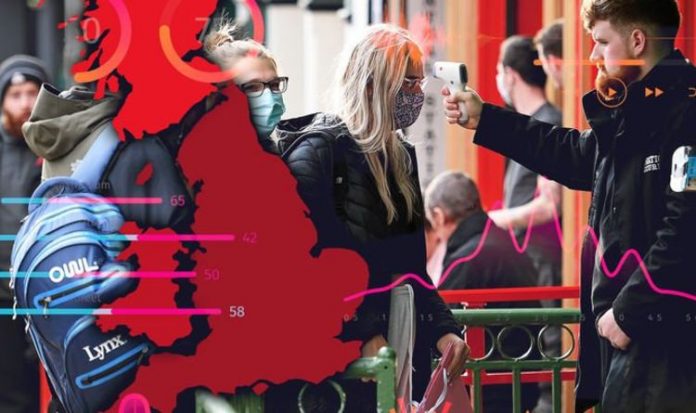 Coronavirus is firmly back for a second wave in 2020 as cases surge across parts of the UK. Different areas of the four nations are currently under different rules as local lockdowns are used to tackle spreading infection – but with few signs of measures working so far.

According to PHE data published October 18, there have been 16,982 new cases in the week leading up to October 16.

The latest data shows there are currently 5,608 people in hospital – with 592 of them on ventilation – in the UK with the virus as of October 15.

The total number of deaths from coronavirus recorded since the start of the pandemic is now 43,600.

The total number of cases since the start of the pandemic is now 722,409.

Out of all of the UK nations, England is faring the worst with its infection and death rate, but also has a considerably higher population than any of the devolved nations.

As it currently stands, the UK has the highest number of cases, reporting 14,704 new cases on Sunday alone.

Another 59 people were recorded to have died on Sunday.

Two areas have been put into Tier 3 restrictions so far – Liverpool and neighbouring Lancashire.

Local authorities in Manchester have not accepted central Government’s recommendations to go into Tier 3 restrictions due to a lack of agreement on financial help for the area.

The areas with the highest rate of infection are South and North Lanarkshire, Glasgow City, and Renfrewshire.

Measures currently in place include a ban on households mixing and the closure of pubs and restaurants in severely affected areas.

Across the world, there have been more than 40 million confirmed cases of COVID-19, with some 1.1 million people succumbing to the disease.

Most of Europe is now witnessing a second wave, with countries like France, Spain, Italy and Germany all reporting a vast increase in cases in recent weeks.