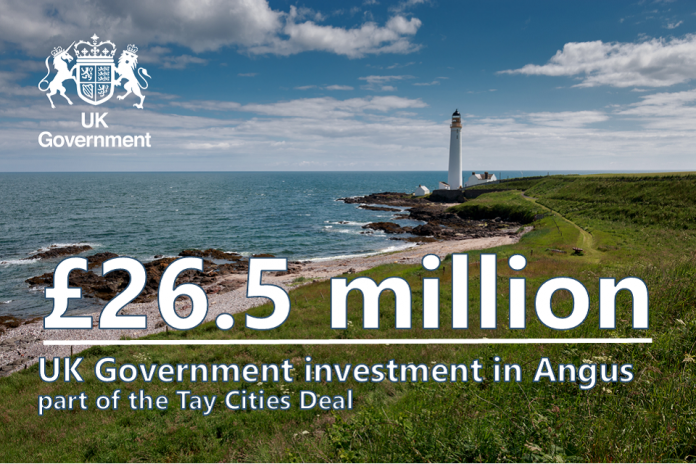 Agreement has been secured for proposals to spend the Angus Fund, a £26.5 million UK Government capital investment fund for projects in Angus, which is part of the Tay Cities Deal.

Following proposals from Angus Council, the UK Government has agreed to invest up to £5.6 million to promote North Angus and Montrose as a clean growth zone where new technologies can be used to improve energy efficiency. This includes support for developing a Drone Port at Montrose which will benefit the emerging off shore wind developments and create a regulated testing area to attract companies from across the UK.

A further £5.9 million will be invested into low carbon projects across the region, such as utilising electric and hydrogen vehicles as low emission transport methods, and reducing the carbon impact of housing.

An additional £15 million of UK Government funding will support the development of agritech, which will support the region’s vital agricultural sector. This will develop technologies that can increase sustainable crop production, improve food security and nutrition, and reduce agriculture’s carbon footprint with the aim of achieving net zero, or carbon-negative, production systems.

These are an exciting set of proposals for Angus with the ability to transform the region into a powerhouse for clean growth and green jobs.

From the outset the UK Government was determined that the Tay Cities Deal should deliver for the people of Angus, and our £26.5 million investment will do just that.

We have now committed more than £1.5 billion to City Region and Growth Deals across Scotland to create opportunities and secure the future of our economy.

This is welcome and exciting news for the people of Angus and the projects being developed within the Angus Fund will be innovative and showcase Angus assets. We had already committed to the Mercury Programme in our Council Plan at the last Full Council meeting, but this funding will ensure a strong start and increased pace of growth.

The purpose of the Mercury Programme is to increase productivity through clean growth, protecting places for future generations to live, work and visit.

READ  Stronger measures brought in to tackle virus in Bolton

Angus Council seeks to achieve this by becoming a sustainable, low carbon region that leads the development and implementation of innovative clean technologies. These technologies will deliver increased economic growth while significantly reducing our carbon footprint and contributing to national reductions in carbon use.

Funding approval for projects remains provisional on the development of acceptable Full Business Cases and the continued oversight and management of the overall Tay Cities Deal.