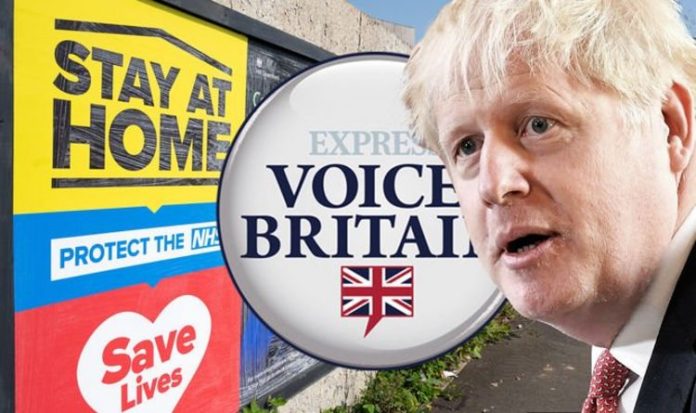 In response to the Irish Government ordering the highest level of restrictions from midnight on Wednesday for six weeks, Express.co.uk asked its readers if Boris Johnson should introduce similar measures in the UK as coronavirus cases continue to rise. Ireland’s fresh restrictions will see only essential retail remain open, with restaurants, cafes and bars limited to takeaway services only.

The poll, carried out from 2.30-9.30pm on October 20, asked: “As Ireland shuts down, should Boris close shops, pubs and restaurants?”

Readers then took to the comments to justify why they don’t want the hospitality sector to shut its doors.

One person was fervently against a second lockdown, and wrote: “Absolutely categorically 100 percent NO!”

A second person fumed: “Ireland may be willing to trash its economy and condemn a significant proportion of working age citizens to joblessness and poverty in the name of combatting a a virus with a 99 percent+ survivability rate in the under 70s and where 96 percent of fatalities thus far have had one or more co-morbidities, we should not.”

A third suggested it didn’t make sense to put the whole country into lockdown, when areas have different rates of the virus.

They wrote: “I really struggle to understand why an area in the UK with low infections should go into lockdown.

Another user agreed, and said: “Shut nothing open everything get on with it.

“Protect the vulnerable don’t waste the economy on hiding.

“We all know who is at risk.

“Its not the vast majority so we should get back to normal.

But other readers hit back at such an assertion and said the virus was more complicated than that.

One person said: “The problem with that approach is that you won’t know until you get Covid whether you’re one of the ones at risk or not and I for one do not wish to die as a statistical anomaly.”

A second person added: “No one can or should argue with that because you are right, no one person knows their own fate with COVID19.”