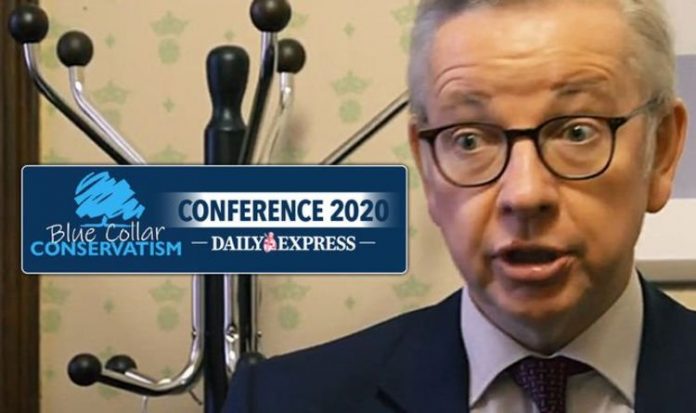 The Government said that as of 9am on Thursday, there had been a further 6,914 lab-confirmed cases of coronavirus in the UK. It brings the total number of cases in the UK to 460,178. Experts have previously warned that describing the daily figure as a record could be “misleading” as it is not clear how many people were actually infected during the height of the first wave due to a lack of community testing at the time. The Government also said a further 59 people had died within 28 days of testing positive for COVID-19 as of Thursday. This brings the UK total to 42,202. But Michael Gove has hinted out how the UK will come out of its regional lockdowns.

Speaking to the Blue Collar Conservatism conference, Mr Gove was asked by former minister Esther McVey, who founded the event in association with the Daily Express, whether he could see an “end game” in sight for the UK’s strict COVID-19 rules.

He said: “I think we need to see the rate of infection fall.

“At the moment we know that the infection rate is rising particularly in the North of England but not exclusively.

“I think we need to make sure we take all the measures necessary.

“We want people to lead as normal a life as possible but at the moment we are prioritising getting and keeping children in school and getting/keeping people in work.

READ MORE: Is he having a laugh? Sadiq Khan demands more than £29BILLION

“That means some restrictions on hospitality.

“We do want to lift them but we do need to keep them in place until we can see that infection rate fall.”

It comes as tougher COVID-19 restrictions have been announced for Liverpool, Warrington, Hartlepool and Middlesbrough aimed at curbing a rise in infection rates.

The measures will come into force on Saturday morning at one minute past midnight.

“We will bring in regulations, as we have in the North East, to prevent in law social mixing between people in different households in all settings, except outdoor public spaces like parks and outdoor hospitality.”We also recommend that people should not attend professional or amateur sporting events as spectators in the areas that are affected.

“We recommend that people only visit care homes in exceptional circumstances, and there will be guidance against all but essential travel – essential travel of course includes going to work or school.”

Mr Hancock said local leaders had been consulted and there will be a £7 million package of support for the councils affected, which the Labour mayor of Liverpool Joe Anderson described as “nowhere near enough”.