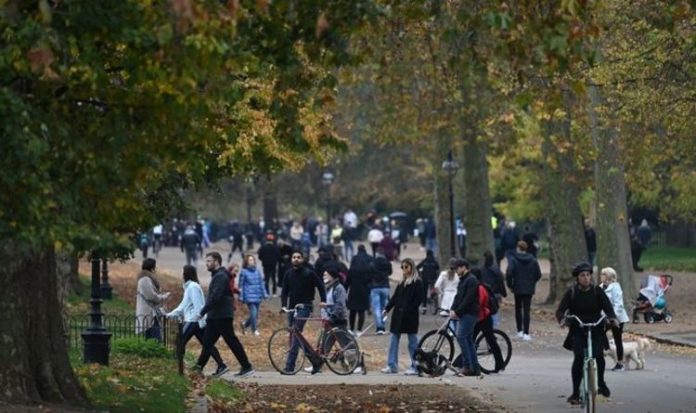 According to Government figures released today, 156 people died in the past 24 hours after testing positive for the virus – down from 162 last Sunday. And 20,572 fresh infections were declared, marking a drop of nearly 20 percent from the 25,254 cases announced this time last week.

The release of the latest data comes after a top epidemiologist said Britain may have passed the peak of the dreaded COVID-19 second wave.

The Zoe COVID Symptom Study app, run by King’s College London, suggests there were 42,049 daily new symptomatic cases of the virus in the UK on average over the two weeks up to November 1 (excluding care homes).

Professor Tim Spector, of King’s College in London, said the country appears to be “heading in the right direction” despite the daily number of new cases remaining high.

The professor of genetic epidemiology said: “Although the number of new symptomatic cases is still high at over 40,000 daily, over the past week cases are heading in the right direction.

“The worst affected areas have shown the most improvement, but large differences between regions remain.

“So, while these population changes will take a while to work through, we believe they are a positive sign that we have passed the peak of this second wave.

We urge everyone to respect the restrictions and help get the number of cases down as soon as possible to help the NHS, end the lockdown and get us in good shape for December.”

Separate figures published by the UK’s statistics agencies for deaths when COVID-19 has been mentioned on the death certificate, together with additional data on deaths that have occurred in recent days, show there have now been 64,000 deaths involving coronavirus in the UK.

And Sunday’s rise of cases means the UK’s total number of confirmed infections is 1,192,013.

On Monday Wales’ 3.1 million inhabitants will emerge from a nationwide 17-day firebreak lockdown.

First Minister Mark Drakeford has called for a UK-wide approach to tackling the pandemic over the Christmas period.

He said Cabinet Office Minister Michael Gove had floated the idea of holding a meeting with the devolved administrations so leaders can “pool ideas, plan together and have a common approach to the Christmas period”.

Mr Drakeford said he “really hopes” the meeting will happen as he called for a combined approach to handling the epidemic.

The lifting of the Welsh shutdown comes as England remains under a lockdown until December 2.

In a bid to stay true to his vow of not extending the restrictions, Boris Johnson has rolled out a mass testing programme.

After launching in Liverpool last week, the initiative is set to be introduced in three towns in England this week, with the help of 1,000 members of the Armed Forces.