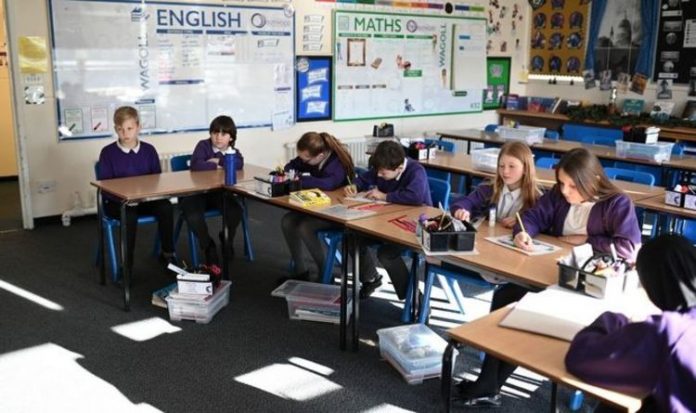 Youngsters who have fallen behind academically during the lockdowns will be invited into classrooms during the summer holidays to help them prepare for the new school year. Under Government plans to assist struggling students, schools will be encouraged to hire freelance tutors or pay staff extra to stay behind to hold extra classes.

Boris Johnson is set to announce a three-point plan to help students who have missed out particularly badly on learning during the pandemic.

School days over the summer period will kick off with sports and group activities while after lunch there will be academic classes.

Ministers are concerned about the impact long periods of isolation have had on students’ mental health.

A source with knowledge of the plans said they aim to put an emphasis on physical activity as well as classroom learning.

They told day Times: “This is not just education support but also social support.

“We are acutely aware that pupils’ mental health has been impacted by not seeing friends or playing sport.”

The Government will pay a “Covid premium” to schools for each pupil considered to be disadvantaged.

This is part of their aim to target the extra resources at those who need them the most.

Mr Collins, who drew up the plans, was appointed the “education recovery” tsar earlier this month.

Schools were first ordered to shut in March 2020 and millions of parents and children across the UK were faced with the task of homeschooling.

During England’s second national lockdown schools were allowed to remain open, though many parents chose to keep their children at home.

Since the beginning of January, when the third shutdown was imposed, primary and secondary schools have offered remote learning for most pupils.

Vulnerable children or those whose parents are key workers are eligible to continue going to school.

Mr Johnson is expected to say that schools can start reopening from March 8.

Speaking on Sunday, Matt Hancock said the Prime Minister will set out a “cautious” plan to relax coronavirus restrictions when he unveils his road map out of lockdown.

The health secretary insisted that, despite the success of the vaccine rollout so far, and the “understandable” urge to return to normal life, the Government’s goal is to take a “cautious but irreversible approach”.

In a series of broadcast interviews on Sunday morning, he said there will be “weeks between the steps” so ministers can “watch carefully” the impact of each relaxation of the restrictions.