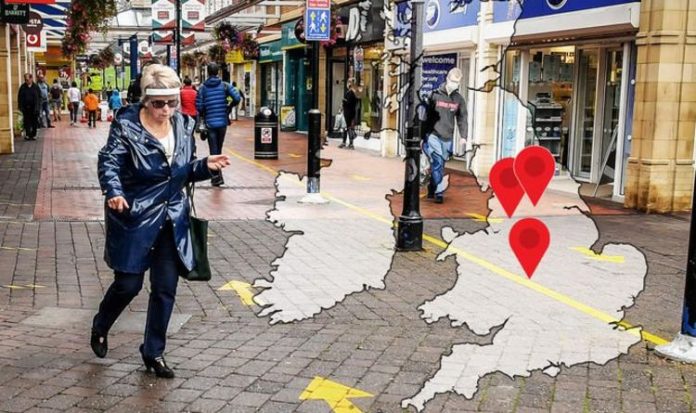 Tough new COVID-19 lockdown measures could be imposed across Birmingham by the end of the week after infections rocketed. While Bradford is under threat of nighttime curfews and Health Secretary Matt Hancock restricting all hospitality to takeaways only in Bolton – as well as new rules meaning venues will have to close between 10pm and 5am.

It comes as fears of a second nationwide lockdown are growing after Prime Minister Boris Johnson announced new laws to restrict social gatherings to six people as COVID-19 cases continue to surge.

In Birmingham, the infection rate now stands at 62.4 cases per 100,000 in the seven days to September 5, compared to 28.1 the week before, according to the latest NHS data.

Only two weeks ago, the city narrowly avoided a restrictive local lockdown such as those imposed in Leicester andGreater Manchester, after an increase in positive test results.

At the time, the city’s seven-day infection rate was just over 30 cases per 100,000 people but later fell.

However West Midlands mayor Andy Street said in light of the “very notable increase” in positive tests in both Birmingham and neighbouring Solihull, further restrictions were now “very, very likely”.

While Bradford is under threat of being the first place to be hit with a nighttime curfew after the rolling seven-day rate of new cases of COVID-19 increased sharply, from 49.1 to 74.7 with 403 new cases.

A ban on mixing outside households in public outdoor settings will also be enforceable by law.

The majority of new coronavirus cases involved people aged 18 to 49.

When asked if the new rules would mean that Christmas is cancelled, Mr Hancock told LBC radio: “I hope not but we clearly need to act. This is a really simple rule which says you cannot socialise with more than six people.”

“We want to set out very clearly for everybody – so that everybody has the chance to see these rules, read them and then to follow them, and that’s why it will come into force on Monday.

“You have seen that where there is a big spike like Bolton, that’s where we will take action immediately.

The Health Secretary also refused to rule out a second lockdown, despite assurances by the Prime Minister.

He said: “Our goal is to avoid having to do anything more drastic by people following the rules.”

But he would not rule out a return to lockdown, saying: “I wouldn’t make a vow like that.

“You wouldn’t expect me to – I am the Health Secretary in the middle of a pandemic where we are trying to keep the country safe.”

But he added he “hoped” lockdown could be avoided, saying: “The number of cases is largely driven by people socialising.”