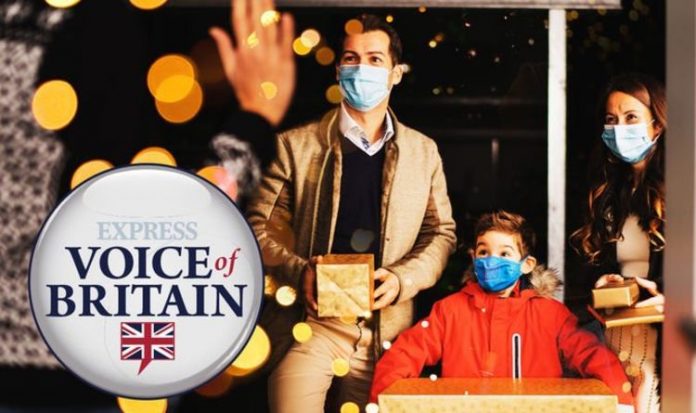 The UK Government and devolved administrations have agreed to relax restrictions and allow three households to form a Christmas “bubble” from December 23 to 27. But some scientists have warned easing the measures could spark a third wave of the pandemic and lead to more hospital admissions in January and potentially another lockdown. Boris Johnson has urged people to “think carefully”, telling families they must make a “personal judgment” about the risks of coronavirus to vulnerable loved ones.

And an exclusive Express.co.uk poll showed the majority of people expected a quieter festive season this year.

The survey found 82 percent (3,482 people) were not planning on a big family Christmas.

Just 17 percent (670 people) said they were planning large-scaled festivities despite the pandemic while one percent (69 people) were still unsure.

One reader said: “It would be nice, but no, not worth it.”

Another said: “If you decide to flout the rules then do not complain if severe restrictions are imposed in January….if you are still here.”

Another said: “Do what’s right for you and your loved ones. Keep to the rules and we may get out of this sooner rather than later.”

But others took a defiant tone and vowed to ignore the Christmas coronavirus rules.

One rebel said: “I’m sure most know the words to Rule Britannia – ‘Britons never never will be slaves’ – well you are now.

“Enough of this Governments enslavement plan: resist and revolt.”

Another said: “I’ll do what I want and see who I want.

“I won’t be dictated to by the ‘suits’ who look like they would struggle to tie up their own shoelaces most of the time.”

The Christmas restrictions were agreed following a Cobra meeting chaired by Cabinet Office Minister Michael Gove, bringing together the Westminster Government and the devolved administrations.

Despite the new measures, families and groups of friends will still face difficult decisions and restrictions on their activities.

The bubbles will have to be exclusive over the five-day period, meaning people cannot shift from one group to another – although children whose parents are separated will be allowed to move between them.

Mr Johnson acknowledged the measures would not add up to a “normal Christmas” and urged people to exercise caution, particularly when meeting with the elderly or the vulnerable.

DON’T MISS
Can pubs open on Christmas Day?[INSIGHT]
Can I visit my parents?[SPOTLIGHT]
Boxing Day sales cancelled: Which shops will be closed on Boxing Day?[FOCUS]

He said: “We can’t afford to throw caution to the wind. The virus doesn’t know it’s Christmas and we must all be careful,” he said in a video message posted on Twitter.

“I know this doesn’t equate to a normal Christmas and it won’t work for everyone. And it is up to each of us to think carefully about how we use this time-limited special dispensation.

“The virus has not gone away and families will need to make a personal judgment about the risk of forming a bubble with or visiting elderly relatives and the vulnerable.”

A joint statement issued by the four UK governments said they had been working closely together to find a way for family and friends to see each other, recognising it must be “limited and cautious”.