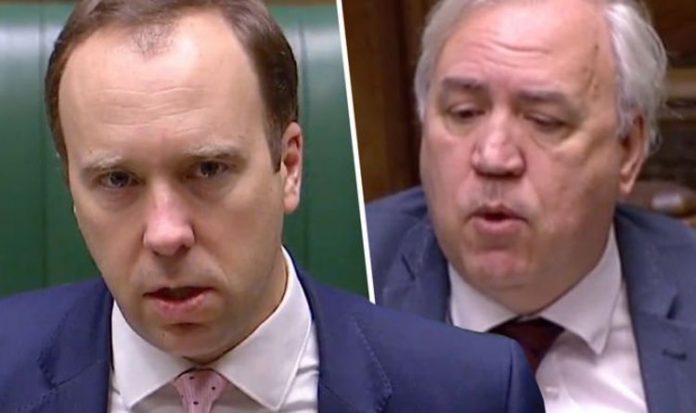 Health Secretary Matt Hancock Hancock has outlined which of the three toughened tiers, ranging from the lowest at Tier 1 to the highest at Tier 3, each local authority in England will face when the current four-week national lockdown ends next Wednesday. He told the House of Commons a review of the tier system is scheduled to take place in two-weeks’ time on December 16. But fury has already erupted emong Tory MPs, who have warned they will not back the motion from the Government being introduced to Parliament next week.

Tobias Elwood, Conservative MP for Bournemouth East and Chair of the House of Commons Defence Select Committee, tweeted: Bournemouth in Tier 2, with only 160 cases per 100k.

“I’m puzzled to see us placed in this tier which will cause further hardship for our hospitality industry.

“I will NOT be supporting the Gov’s motion to introduce this next week.”

Sir Robert Syms, the Conservative MP for Poole in Dorset questioned how regularly this process will be reviewed, and if an area remains in a tier for twoo long, whether there would be an appeals process. He said: “There will be bitter disappointment in Dorset that we are in Tier 2, although our infection rate is falling quite rapidly.

UK tier rules: Matt Hancock was challenged on an appeals process if areas remain in a tier too long (Image: SKY NEWS/PTV)

UK tier rules: Matt Hancock made the annoucement in the House of Commons (Image: PTV)

“My main interest today is finding out how we get out of Tier 2 and into Tier 1.

“If we’re going to have regular reviews, for example every week, then that’s great, but if we’re not and we are stuck in that tier for 2-3 weeks, would the Secretary of State consider some kind of appeals process?”

Mr Hancock replied: “We will review these in a fortnight and then regularly by which he can reasonbly take weekly.

“We have a weekly cycle of meetings with the Chief Medical Officer on a Tuesday.

“I then chair a meeting on the Wednesday and then make an announcement on the Thursday for any changes to the tiers.

The Government revealed Manchester, Birmingham, Leeds, Hull, Blackpool, Wolverhampton South Yorkshire and Kent have all been placed into Tier 3.

Several other areas have also been hit with the toughest restrictions, including Tees Valley, The Humber, West Yorkshire, South Yorkshire, Leicester and Leicestershire.

A number of areas across the North East, including Sunderland, Middleborough, Gateshead, South Tyneside, North Tyneside, Durham, Darlington, Hartlepool and Darlington have been placed into Tier 3.

UK tier rules: Manchester will be hit by the toughest restictions (Image: GETTY)

The highest tier also includes Staffordshire and Stone-on-Trent, Warwickshire, Coventry and Solihull, Derby and Derbyshire, Nottingham and Nottinghamshire, Leicester and Leicestershire and Lincolnshire.

Tier 3 restrictions state bars, cafes and restaurants must remain shut except for takeaway services, with different households unable to mix except in public places outdoors.

Areas of the country hit by the top level of restrictions will be offered support from NHS Test and Trace and the armed forced to deliver a six-week rapid community testing programme, utilising lateral flow COVID-19 tests, which give results within an hour.

Mr Hancock said that the measures are necessary given the “scale of the threat” faced by the UK.

He told MPs in the Commons: “The majority of England will be in Tier 2, but in a significant number of areas I’m afraid (they) need to be in Tier 3 to bring case rates down.

What do you think about the tier your area is in? Let us know in the comment section below

“Now, I know how tough this is, both for areas that have been in restrictions for a long time like Leicester and Greater Manchester, and also for areas where cases have risen sharply like Bristol, the West Midlands and Kent.

“The full allocations have been published this morning and laid as a written ministerial statement just before this statement began.”

“I understand the impact that these measures will have, but they are necessary given the scale of the threat that we face.”

London and Liverpool are among a number cities to have been placed into Tier 2.

These areas have been joined by others including East and West Sussex, Brighton and Hove, Surrey, Reading, Windsor and Maidenhead, West Berkshire, Hampshire (except Isle of Wight), Buckinghamshire and Oxfordshire.

Tier 2 restrictions state different households will be banned from mixing indoors, while alcohol can only be served by premises in the hospitality sector as part of a meal.

In a welcome update, up to 2,000 people will be allowed to attend outdoor events, and 1,000 indoors.

But only the Isle of Wight, Cornwall and the Isles of Scilly have been placed in the lowest Tier 1 set of restrictions.

Health Secretary Mr Hancock said “these are not easy decisions, but they have been made according to the best clinical advice”.

He told MPs in the House of Commons: “Thanks to the shared sacrifice of everyone in recent weeks, in following the national restrictions, we have been able to start to bring the virus back under control and slow its growth, easing some of the pressure on the NHS.

“We will do this by returning to a regional tiered approach, saving the toughest measures for the parts of the country where prevalence remains too high.”

A Government website set up for people to check which tier their area has been placed into also quickly crashed.

When entering a postcode into the checker, an error message says: “Sorry, we’re experiencing technical difficulties.

Mr Johnson chaired a Cabinet meeting on Thursday afternoon and will emerge from his own period of self-isolation to give a news conference from Downing Street to explain more around which areas in England will be placed under which tier in the toughened system.