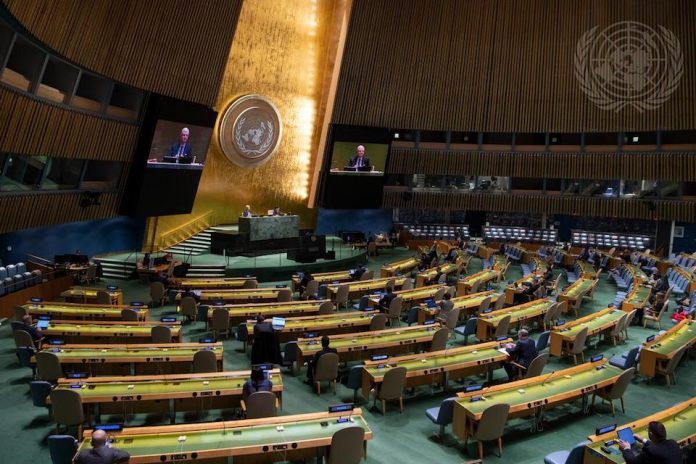 I would like to start by reiterating the United Kingdom’s unwavering support to Ukraine’s sovereignty, independence and territorial integrity, including within its internationally recognised borders and territorial waters.

It is seven years since Russia seized the Autonomous Republic of Crimea and the city of Sevastopol from Ukraine. The passage of time will never make the illegal annexation acceptable.

By forcibly seizing 10,000 square miles of Ukraine, Russia broke the first principle of international law; that countries may not acquire territory or change borders by force. Russia’s actions flagrantly violated its own international commitments including in: Article 2 of the United Nations Charter, the Helsinki Final Act and the Budapest memorandum.

Through resolution 68/262, the UN General Assembly affirmed Ukraine’s territorial integrity within its internationally recognised borders and the illegality of Crimea’s change of status.

The UK’s position is clear: we do not and will not recognise Russia’s illegal annexation of Crimea. Crimea is part of Ukraine.

Russia continues to commit serious human rights violations beyond its borders, in Crimea. The de-facto authorities persecute and restrict the fundamental freedoms of Crimean Tatars and ethnic and religious groups, with arbitrary arrests, torture and intimidation.

At least 109 Ukrainian political prisoners remain in detention in Russia and Crimea. Crimean Tatar human rights defender Emir Usein Kuku is one such prisoner – he has spent five years imprisoned in Russia, a foreign country, 2300 km from his family and home. Kuku is ill, yet he continues to be denied proper medical treatment. The UK calls on Russia to immediately release all Ukrainian political prisoners.

Russia claims there are no human rights abuses. Then why not allow the UN High Commissioner for Human Rights to visit Crimea to provide a full independent assessment? We call on Russia to grant this access in line with UN General Assembly resolution 75/192. There should be no excuses from Russia for its failure to do so.

We also remain deeply concerned about Russia’s ongoing militarisation of Crimea, the Sea of Azov and the Black Sea. Russia has stationed at least 32,500 military personnel in Crimea, and has also deployed advanced weaponry and missile warning systems there. Last July, President Putin laid the keel to build warships in Crimea. This is a global security concern. The UK calls on Russia to withdraw its military forces and equipment from the peninsula.

In the Black Sea and Sea of Azov, Russia’s ships are intentionally obstructing traffic, and violating the right of passage. Every day commercial vessels are harassed. These restrictions are part of a wider strategy to disrupt Ukraine’s economy and destabilise Ukraine.

Since 2015, Russia has forcibly conscripted 28 000 Crimeans and has forced at least 44,000 Crimeans to leave, while more than 172,000 Russians have moved into Crimea Russians now comprise 7-12% of the population, and over 18% in Sevastopol. The UK calls on Russia to cease these unacceptable practices.

Mr President, the Russian-led conflict in eastern Ukraine is entering its 8th year. Russia continues to incite and support military activity by armed formations, including through the deployment of Russian troops and military equipment on Ukrainian territory.

The United Kingdom condemns continuing restrictions on the freedom of movement of the OSCE Special Monitoring Mission. The systematic denial of access in non-government controlled areas goes far beyond reasonable Covid-19 precautions. We call on Russia to ensure safe, unconditional and unimpeded access.

We reiterate our strong support for the Minsk agreements, which provide for a peaceful resolution to the conflict in full respect of Ukraine’s territorial integrity, and for the work of the Normandy Four in this regard.

We welcome the significant reduction in violence and casualties since the strengthened ceasefire of 27 July last year. It demonstrates what political will on all sides can achieve.

However, Russia and its proxies continue to block the opening of new entry-exit points, frustrate plans on disengagement and demining, and delay further prisoner exchanges. If Russia genuinely wants peace, its actions should support it.

Instead, Russia continues to fuel the conflict and the Ukrainian people continue to pay the price. There have been nearly 3,500 civilian deaths and thousands more injured; 3.4 million people require humanitarian assistance; and 1.4 million are internally displaced.

The United Kingdom once again calls on the international community to stand united behind Ukraine and to oppose Russia’s continued attempts to destabilize Ukraine, undermine her sovereignty and steal her territory.