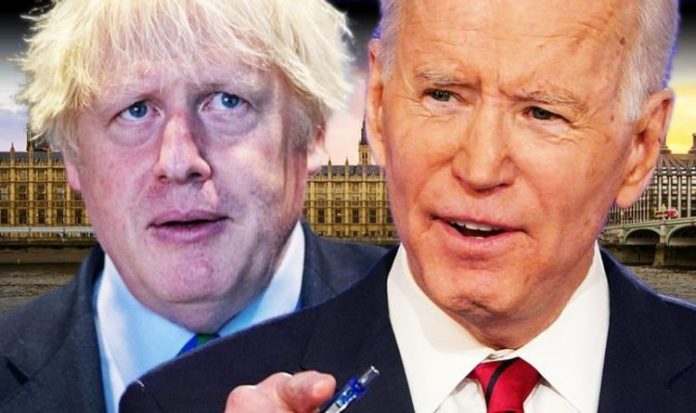 President Donald Trump clashed with his rival Joe Biden in last night’s first election debate, with interruptions, petty exchanges and falsehoods marring the major event. Mr Biden, the Democrat candidate, still holds a stable lead in the presidential race, with poll trackers seeing him ahead of Mr Trump. As the election campaign gets off to a frantic start, many in the UK are wondering how the result may affect British interests. Part of the debate has been who would be a more beneficial US President for post-Brexit Britain.

Ian Shapiro, Sterling professor of political science at the Yale School of Management, highlighted how “unpredictable” this is.

He told Politico earlier this month: “The extreme unpredictability of American policy until after the election means what might or might not be available from the US to the UK is just inherently unknowable.”

However, Prof Shapiro did warn that another complication could be if Mr Biden was less enthusiastic about striking a large trade deal with Britain and instead picked up where the Obama administration left off in its pivot toward the East.

A Tory adviser, however, highlighted how a Biden presidency could simplify things for the UK.

They told the Sunday Times: “The assumption in Whitehall is that if Biden wins, we won’t need to do a bilateral trade deal because we might both end up in Trans-Pacific Partnership.

“That is already committed to high standards of animal welfare. Some of the sting will be removed from those issues.”

But Mr Biden’s comments about the UK’s withdrawal from the EU in previous years will have no doubt struck fear in Westminster.

Mr Biden, speaking in October 2018, also noted the frequently lauded ‘special relationship’ between the US and UK, hinting that it could suffer after Britain leaves the bloc – as it did on January 31.

Mr Biden added: “There is a special relationship – we’ve been locked cheek to jowl on almost every important issue.

“Without England being totally integrated, to the extent that it’s distant, diminishes our ability to have influence on events on the continent.”

Political journalist Mark Handler highlighted that Mr Biden could prioritise US-EU relations rather than build bridges with the UK.

He warned that Mr Biden’s emphasis would be on mending fences with Berlin and Paris, not celebrating a “special relationship” with London.