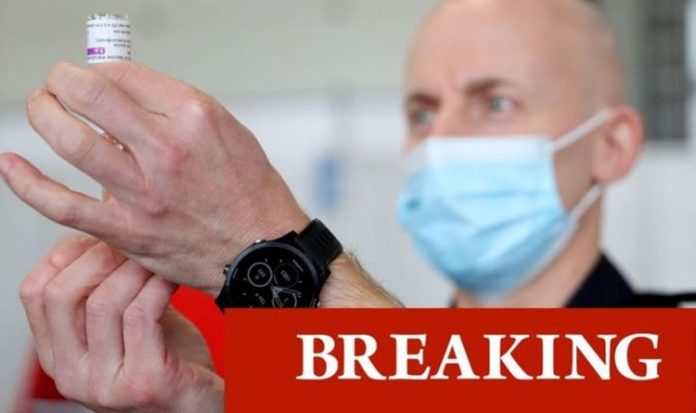 Some 100 million doses of the Oxford/AstraZeneca vaccine are reportedly on course to be delivered in the first half of the year. The UK also has millions more jabs from Pfizer and Moderna.

This means the UK will have enough to give at least one dose to all 53 million adults by the end of June, the i reported.

The newspaper cited a senior Government source as confirming AstraZeneca is expected to deliver the 100 million doses in the first half of 2021.

A No 10 source said: “Depending on supplies, we are hopeful that the vaccines roll-out will continue to accelerate.

“But as with all highly complex programmes it remains possible that it will be disrupted at some point.”

It comes as the Government has announced more than half of all UK adults should receive a coronavirus vaccine by May.

Downing Street confirmed the rollout aimed to reach all those aged 50 and over, as well as adults aged 16-65 in an at-risk group, by May – having previously said it aimed to do so “by the spring”.

Health Secretary Matt Hancock said: “My plan is that we should be able to offer a vaccine to everybody in categories one to nine – that’s all the over-50s – by May.

“Lots of things have got to go right to hit that goal, especially supply, which is the rate-limiting factor, but I’m sure, working with the NHS and everybody else who is making this happen, that if we keep going at the pace we can, then we can make sure all the over-50s get the offer of a vaccine by May.”

It has been reported that outdoor team and individual sports, as well as outdoor gatherings, could be possible within weeks of a planned return of schools from March 8.

Prime Minister Boris Johnson is due to publish a roadmap for lifting the restrictions later this month.

Earlier on Friday, the Government announced a deal with biopharmaceutical company CureVac to develop vaccines against future variants of coronavirus.

The partnership will allow the UK to “swiftly tweak and roll out” existing jabs to combat new variants, according to Business Secretary Kwasi Kwarteng.

Almost all vaccines developed through the agreement will be modifications of an existing jab by CureVac, which is currently undergoing phase three clinical trials.

The Department for Business, Energy and Industrial Strategy (BEIS) said it will allow large-scale manufacturing in the UK to ramp up quickly to ensure new jabs can be rolled out if a strain emerges which shows resistance to existing vaccines.

Mr Kwarteng said: “The UK’s vaccine programme has been a national success story so far, and we are determined to make sure we’re as prepared as we can be in the long term if new variants of Covid-19 emerge.

“This fantastic new partnership means we can work to swiftly tweak and roll out new variations of existing vaccines if we need to, while also building up Britain’s vaccine manufacturing base in the process.”

A further 19,114 coronavirus cases were confirmed on Friday and the death toll increased by 1,014.