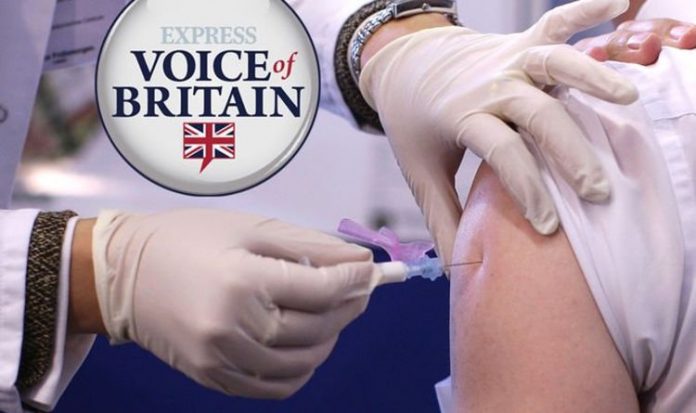 Britons received a much needed boost this week after a major breakthrough was made in the search for a vaccine. The Government has ordered 40 million doses of Pfizer/BioNTech’s jab after initial results from a trial suggested the drug was 90 percent effective in combatting the virus. Health Secretary Matt Hancock has already put the NHS on standby for the first week of December.

Ahead of a potential roll-out, Tom Tugendhat, chair of the Foreign Affairs Select Committee, claimed people who reject a jab may not even be allowed to return to work or enter pubs and restaurants.

A subsequent poll of more than 4,500 Express.co.uk readers has found two-thirds believe workplaces should not ban staff from for not taking a COVID-19 jab.

The survey carried out between 9am on November 13 and 11am on November 14 asked 4,764 Express.co.uk readers, should workplaces ban employees who refuse to take a coronavirus vaccine?

The vast majority of people, 66 percent (1,606), said staff should not be banned from workplaces and voted “no”.

A third of those surveyed, 33 percent (1,606), believe employees who refuse a vaccine should be banned from workplaces and voted “yes”.

The poll divided opinions amongst Express.co.uk readers who let their feelings known in the comments section.

One reader said: “People should not be forced to have any vaccination. Up to them. Banning them from work would punish the work place.”

A second user said: “Surely those who agree to being vaccinated will then be protected from contracting the virus – so why are they demanding those who don’t wish to have it be punished…”

Meanwhile, a third commented: “Yes. Ban them without pay. Others have a right to be as safe as possible. The safety of the majority overrides the rights of the minority.”

A fourth added: “A person’s medical decisions are a private matter and one of personal choice.”

The debate was sparked after Mr Tugendhat said he could foresee a world where employees and social venues will demand “vaccination certificates”.

Speaking on the Huffington Post’s Commons People podcast, the MP for Tonbridge and Malling, said similar methods have already been used around the world and gave the example of yellow fever certificates.

He said: “If vaccination works and if we’re confident it’s safe, and all indications so far are good, then I can certainly see the day when businesses say, ‘Look, you’ve got to return to the office and if you’re not vaccinated you’re not coming in.’

READ MORE: Boris on brink of CAVING to EU demands now Cummings has left No. 10

“And I can certainly see social venues asking for vaccination certificates.

“There was no debates, no appeals and no further requests. And I can see a situation where yes, of course you’re free not to have the vaccine, but there are consequences.”

The Joint Committee on Vaccination and Immunisation said care home residents and staff would be given first priority for any jab if it is approved by independent regulators.

Professor Jonathan Van-Tam said he would put himself “at the front of the queue” if he could for the vaccine and stated he would tell his 78-year-old mother to “be ready” to take the vaccine.

The Deputy Chief medical officer for England reassured the public a vaccine would not be rushed through and said he “absolutely trusts” the Medicines and Healthcare products Regulatory Agency.

The Health Secretary hailed the progress towards a jab but acknowledged there was further steps to ensure it is fully functional and safe.

Mr Hancock said: “I think that this is a promising step forward but there’s many steps that still need to be taken.

“Perhaps the most important to stress is that we’ve seen the effectiveness data but we will not license a vaccine unless it is clinically safe and we haven’t seen the final safety data.

“So that is the biggest hurdle still to come and if that fails then it doesn’t matter how effective this vaccine is, we won’t deploy it.

“And then, of course, there’s the enormous challenge of the rollout.”