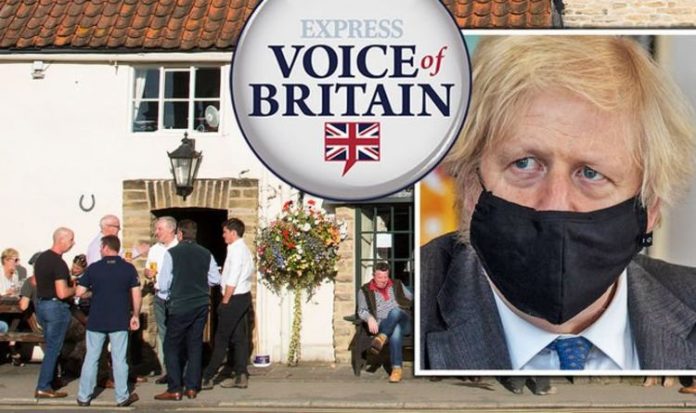 The NHS app could be used to display vaccination status or latest coronavirus test results, officials have suggested, as ministers consider the ethical issues surrounding the possible introduction of vaccine passports. Boris Johnson said Michael Gove was leading a review into the “deep and complex issues” surrounding “Covid status certificates”.

The review will also investigate whether businesses such as pubs and theatres could be prohibited from making access conditional on vaccination alone.

But an exclusive Express.co.uk poll found most people would not back the idea of banning people without vaccine passports from pubs.

The poll asked readers: “Should people without vaccine passports be banned from pubs?”

One reader said: “Nadhim Zahawi ruled out the prospect of state-issued documentation showing whether someone has had a coronavirus vaccine.

“Boris Johnson said he had no plans to introduce so-called vaccine passports for activities like going to the pub.”

Another reader said: “I won’t go to pubs or restaurants if the staff are harassing me for proof if I’ve had the vaccine or not.

“This breaks all discrimination laws.”

Another said: “Considering that the Government itself has said that the vaccine won’t necessarily stop you catching Covid – it will just make it milder or asymptomatic and you could still pass it on to others – vaccine passports are a silly idea.”

And another said: “The vast majority of the Great British public are realists and they are waiting in their millions to get the vaccination so that they can get on with their lives.

“It is only a teeny tiny few who will make the choice not get vaccinated and will, as a consequence, isolate themselves from society.”

Mr Johnson has acknowledged that “fervent libertarians” will reject the idea of a vaccine passport while others will “think there’s a case for it”.

Facing criticism from some Tory MPs over the pace of change, the Prime Minister said he was “hopeful” that all legal controls can be removed on the final date earmarked in his four-step plan.

Having insisted that he will be led by “data not dates”, the Prime Minister expressed optimism that relaxations will be complete by June 21, as tentatively scheduled in his road map, when nightclubs could reopen and large-scale events resume.

He said: “I’m very optimistic that we’ll be able to get there.”

Scottish First Minister Nicola Sturgeon told the Scottish Parliament she would “never support something that deepens social inequalities” or “took away people’s civil liberties” based on their medical history.

But she added: “We should think properly, without closing our minds at this stage, to what a vaccine passport or certificate might offer us.”